The manner in which members of the anti-vaccination lobby have leapt upon the measles tragedy in Samoa identifies their awful, predatory cult quite well.

To completely understand why anti-vaccine activists promote such intellectually vicious lies and indeed hatred regarding an epidemic that Samoa has labelled a state of emergency I’d argue we need to first look back. Back to July last year when headlines reported the deaths of two infants following the MMR vaccination. Or rather, what we now know was thought to be MMR vaccine. We need to look back dear reader because antivaccinationists reacted in an “I told ya so” manner that was almost glee.

Despite there never being a recorded death due to vaccination or a vaccine in Australia, anti-vax profiteers who have peddled lies for years contend that death and disability after vaccination not only happens but are widespread. A vaccinologist was quoted in evidence to the No Jab No Pay Bill hearing that in Australian injuries serious enough to require compensation range between zero and five per year. I do apologise for referring to that occasion yet again. I also recommend the government publication Questions About Vaccination.

We must look back because regrettably it was the bogus causation peddled by anti-vax identities that gave them the confidence to begin commenting on this measles outbreak that hit Samoa in October this year (2019). As for facts, genuine health professionals and epidemiologists would be familiar with adulterated, out of date and counterfeit medications and vaccines causing harm in nations with health systems and infrastructure less developed than in New Zealand or Australia. Yet these events occur far less today due to safety procedures instigated across the globe.

On 4 June 2019, both nurses pleaded guilty to negligence causing manslaughter. On 2 August, both nurses were sentenced to five years in prison. During the sentencing hearing, it was confirmed that one of the nurses mixed the MMR vaccine powder with expired muscle relaxant anaesthetic instead of water for injection supplied in a vial with the vaccine. Eight Samoan speaking New Zealand nurses visited Samoa in June to provide training for vaccinating nurses at district hospitals.

The same reference informs us there has never been a death associated with this vaccine in N.Z. It also has a helpful timeline and includes under August 3rd;

Report on RNZ website: The two nurses, who pleaded guilty to negligence causing the manslaughter of two infants, have been sentenced to five years in prison.

The Samoa Observer published a detailed account of the sentencing hearing, where it was confirmed that one of the nurses mixed the MMR vaccine powder with expired muscle relaxant anaesthetic instead of water for injection supplied in a vial with the vaccine.

The entire event effected parent confidence in immunisation. These doubts were magnified by antivaccinationists resulting in a further realisation of their aim: a reduction in vaccination. The Guardian recently reported that the WHO blames the “anti-vaccine scare” for the rise in cases and of course deaths. Kate O’Brien, director of the WHO immunisation department stressed that the rapid spread of measles in Samoa was due to the “very low coverage” of immunisation.

This resulted in the temporary suspension of the country’s immunisation programme and dented parents’ trust in the vaccine, even though it later turned out the deaths were caused by other medicines that were incorrectly administered.

O’Brien said that an anti-vaccine group had been stoking these fears further with a social media campaign, lamenting that “this is now being measured in the lives of children who have died in the course of this outbreak”.

Misinformation about the safety of vaccines, she said, “has had a very remarkable impact on the immunisation programme” in Samoa.

At least 42 fatalities can be attributed to this measles epidemic at time of writing. In the video below anti-vaxxer identity Taylor Winterstein is mentioned as having visited Samoa in June with diehard anti-vaxxer Robert Kennedy Jnr. Winterstein described herself as “pro-science” the narrator tells us. Oh, my.

Please spend some time reading up on this woman who is presently making a living scamming Wellness devotees and the ill out of their money.

Given the harrowing situation in Samoa and the speed at which measles morbidity and mortality is increasing the government has made the measles vaccine compulsory and warned those preventing community members from being vaccinated to stop.

Such as Fritz Alaiasa Neufelt, the oh-so-savvy businessman selling filtered tap water as the measles fighting “Kangen Water”. Lying as he plays with the lives of ill Samoans he claims that after a spray of his magic water;

“They’re feeling good,” he said. “The measles are already … not cured, but it’s already back to normal”.

The ABC recently reported that the “pro-science” Winterstein was a tad concerned about the governments position. No, not the position of vile Fritz spraying measles sufferers like office plants but the government.

“Forcing a medical procedure on an entire country, especially one that is proving to be ineffective, dangerous and making the virus more deadly, is straight up barbaric,” she wrote on Facebook.

So um, check it out, right. A “pro-science”, so-called “influencer” who peddles herself as a health guru has a tantrum claiming that the only known safe and effective preventative for measles is “proving to be ineffective, dangerous and making the virus more deadly”. And yeah, Nazi Germany. Pfft. Oh I’m influenced Tay. Trust me.

I’d say you can’t make this stuff up but that’s exactly what they do. Consider the increase in cases below and the time frame it covers. 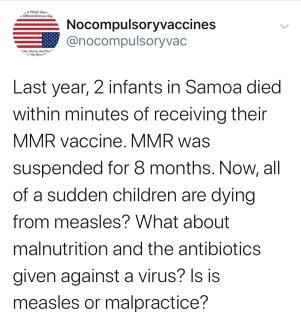 There is no doubt. A drop in MMR vaccination has brought Samoa to a tragedy of shocking proportions. Two doses of MMR is the recommended, clearly life saving, dose.

But still, Meryl Dorey of The Australian Vaccination Risks Network tweeted this dishonest evidence free nonsense (left) just recently. Just as Winterstein pushes the piffle that the vaccine makes the virus more deadly, Dorey tries to convince her cult that malpractice is the cause.

I would urge Meryl Dorey to have another look above at the facts and follow some of the links. Revisit what is known about these deaths. Understand that it was not the expected MMR vaccine they received before dying.

Accept two nurses are now serving five years in prison for negligence. Know it was a negligent error in preparing the adulterated mixture that led to the deaths, then an eight month suspension of MMR. Admit the facts, admit the reality. Stop your lies.