So, I’m innocently waiting for some towels to wash and glance at Twitter to read this retweet by Miranda Devine.

I follow our thuggish, far right wing religious conservative, progressive policy hating, character assassinating, climate change cheering, evidence denialist Miranda because she’s, well… shat in the face of some rather esteemed colleagues. And is not beneath using grieving parents to fill her anti-drug barrow with emotional outrage in lieu of evidence. A unique and unpopular topic I realise, but not immune to the benefits of evidence based critical thinking.

Anyway, @wakeup2thelies certainly bellowed his message on Twitter – three times in an hour.

Over to Wake Up To The Lies I go, to be slapped in the face with logical fallacies. Under the heading Death Threat-Gate or The AFP Must Investigate Anna-Maria Arabia claims is a report about Anna-Maria’s interview on ABC News discussing recent death threats. She is CEO of FASTS – the Federation of Australian Science and Technological Societies. And like most Aussies and the vast majority of scientists, accepts the evidence on climate change. Which sadly makes her a target for the petty minded rednecks who have no idea that if this evidence was to the contrary, scientists would shout it from the rooftops.

Wake Up To The Lies is a conspiracy theorists site written by an immature 30 year old master of obfuscation and delusion calling himself Adam. Having risen to the dizzying scientific heights with credentials as a part-time shop assistant he’s taken to ranting about politics on the internet. Helping turn the information super-highway into a roller coaster ride through the Twilight zone, Adam recounts the tale basically as an argument from ignorance, personal incredulity and begging the question. Proving he really is a part-time shop assistant he writes two sentences. The second being:

The AFP MUST now Investigate this claim. Anna-Maria Arabia, also claims she deleted the email this is no problem because the AFP can easily recover deleted files and find the ISP from the sender. It is a crime in Australia to send a death threat see ( here ). The AFP must investigate it to find the person responsible or to verify her claim.

Yes, I know. He means “IP address” not “ISP from the sender”. The kids a part time shop assistant so cut him some slack. I sure as hell didn’t. Now when I see caps lock in action, I take the same gravely serious approach as one does with anti-vaccination conspiracy theorists. I laughed. I could only imagine the urgent AFP memo demanding a halt to all ongoing investigations because Agent Shop Assistant had used caps lock. I checked his credentials as a skeptard listed under the tab “Who Am I?”.

I left a rather unhelpful comment suggesting that if conspiracy sites like his didn’t carry on, then the loons out there wouldn’t be prompted to send boring death threats. It wasn’t published. Transparency failure one. So I headed over to the “here” in Agent Adams’ post, which was Australian Climate Madness and the post “Death Threats To ANU Scientists”. It too was using Adams’ false continuum that these threats can’t be real because they are a crime. And if they are crimes, why then false analogy informs us we’d all know the very truth. My head hurt. Still, I left this comment which was immediately published.

It it not an “investigation worthy” crime.

A minimum of three sequential emails from the same person is required to justify a waste of resources. Intentions to kill are not traditionally preceded by announcements and digital bread crumbs.

Even then threats may correspond with other crimes such as using a carriage service to harass, intimidate or offend. I’ve had personal experience with this scenario.

No action was pursued – despite grave assurances – and I was never contacted again by authorities.

So back to the part-time shop assistant’s site to see if he would be so gracious. Submitting actually hides the comment. Hence the screenshot. 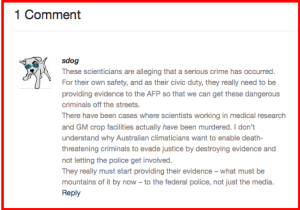 We’ve already passed seven logical fallacies so I shall desist from the temptation. But this nonsense of expecting scientists do their “civic duty” so “dangerous criminals” are kept “off the streets” is utter bollocks. It’s even bordering on delusion to suggest unconfirmed threats weaken the evidence for climate change. For those of us in controversial areas and public health these trifles are known as “security issues”.

May I ask you all to pull out your violins and strike a mournful tune as I confirm that amidst frequent threats and insults I did enjoy four delightfully colourful threats of rape, torture, murder running to pages from a returned soldier who disliked my linking to Keep God out of our democracy by Carmen Lawrence, which challenged using Christian values in foreign policy. I posted a single hyperlink to the story. No comment – nothing.

The poor chap below assumed my email domain was my workplace and included promises of “meeting” me there for torture. Then must have checked the office hours of this same place to chronologically refine his plans to…

“… stomp your terrorist loving, anti australian, little faggot hole. Ill put some serious pain up you …. whatever you think you are. IF you ever were in the forces someone would have shot you. Kovco style. LOL… I will fuck you up. Even better where R u and I will come and make you my bitch so. keep going if you want to….

…. You need a reality check son! It is your lack of patriotism that truly saddens me…..

…In fact you are really dumber than dog shit cos I know a lot about you already and more than enough! you silly little boy. I dont assume. I know…

This went on for volumes. Ahhh, how I miss the good ole’ days. The poor child knew nothing about me of course and I had far more serious issues to manage than a keyboard warrior. I tried to reason with his stressed mind actually concerned for those he had access to. I’d tracked his emails to a Brisbane hospital, spoke to the IT head who put me in touch with Paul Grainger of QLD health who ensured me the QLD Crime and Misconduct Commission would be a-rollin’ out.
Never heard another word… nor cared to. I was used to any manner of lunacy and violence in a certain role. The point here is when you’re hitting the mark and opponents have nothing to rebuke you with, then threats and death threats emerge. But I can certainly identify with those who would be intimidated.
I can assure the likes of Adam and his climate science denialist pals they too will never hear whatever it is they think they deserve to and more to the point it’s none of their darn business.
Advertisement