Monika Milka is a perfect example of why alternatives to medicine have no place being legitimised in Australian universities.

On Monday February 13th, Today Tonight Adelaide ran a piece [below] on the gruff chain smoker who runs Monika’s Entity from run down sheds in Wallaroo and what passes for “rooms” in Gawler, South Australia. Despite being entirely unqualified in anything or registered anywhere Monika claims to be a healer of amazing talents. 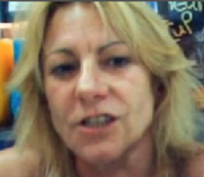 Monika Milka claims to be a homeopath, homeotoxicologist, iridologist, mesotherapist, biomesotherapist, deep tissue masseur and a deft hand with a quartz crystal diamond laser. Her “Tonics” – 150 ml bottles of ethanol and water sell for $150, and prompted the Today Tonight sting. In a hidden camera first, Milka claims her tonics are responsible for Hugh Jackman’s Wolverine physique.

“He needed to get the part for Wolverine… I made his physique”.

Presently as per the Public and Environmental Health Act 1987 Monika is under S.A. Health Department orders to not administer any substances to any person. Nor can she provide substances to another person, unless that substance is a commercial product. Of course this means Monika would have to spend to buy stock and sell at a retail price. But when you can score $150 for a splash of magical water those S.A. health authority orders prohibiting provision of anything must be a pain in the wallet.

On February 2nd Monika launched a Facebook scare campaign claiming that Heliobacter Pylori was vulnerable to her tonic which could eliminate infection. Diagnosis seems random, and antibiotics aren’t mentioned.

Even people with Chronic Fatigue Syndrome “in their veins” were led on by her. “Can I order it online?”, asks one target with CFS. Milka replies…

The scam continues. Only Monika’s “tonic” can save humanity from this “Bastard”. 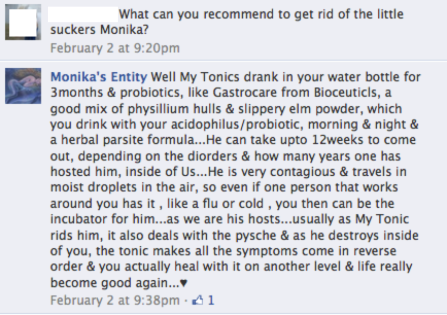 Tooth and gum pain? No problem:

How about your pets? Monika has a message for the bird brains out there. Homeopathy makes pets feel good – and smell nice.

Water you can add to… more water. Perhaps add it to cream. Wow, this is magic water indeed.

On and on it goes. I’m sure you get the idea. Monika’s $150 bottles of water range out to cure everything.

Let’s review how a not too bright con artist manages to be breaching conditions under the Public and Environmental Health Act 1987 simply by selling water. Well back around 2005 Monika hit on a money making boon. She decided she would claim to cure cancer by “killing the worms” that Monika invented as responsible for any manner of horrors. She’d do this by mesotherapy – injecting saline solution and “other substances” into very sick people for $500 per week.

Not long after this in June 2008, S.A. Health issued a Mesotherapy Alert. It included reports on six people who had attended Monika’s Entity suffering “multiple symmetrical skin abscesses on their calves, buttocks, thighs, abdomen, shoulders, face and neck”. Today it appears up to 14 people were seriously effected by this madness.

One had developed a notoriously difficult to treat mycobacterial abscess. Translation? Monika was almost certainly injecting her customers with tap water, the most common source of mycobacterium. Either that or sewerage contaminants. 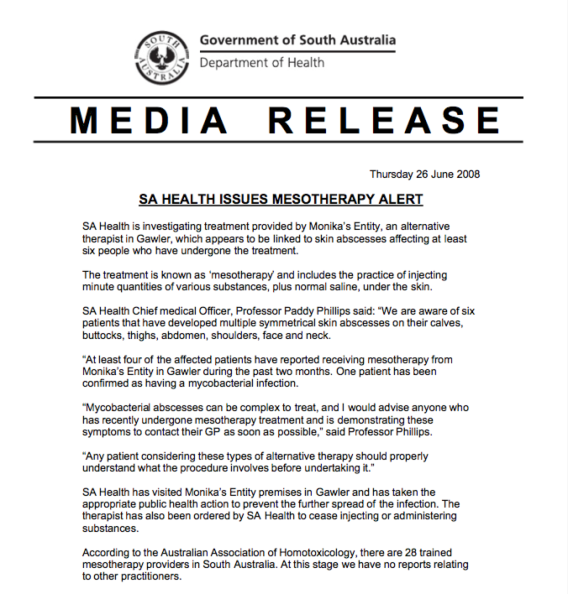 Monika writes on Facebook and elsewhere using bizarre grammar and spelling. We get a strange contrived pixie sing-song lilt about the universe, karma, the law of attraction and nasty things eventually happening to anyone who challenges her. Monika apparently has some explaining to do.

Remember, Milka is by law not allowed to provide anything to anyone. I hate to be so blunt but she is a dirty, dangerous, deceptive and cruel scam artist. Although Monika has no qualifications, registration nor accreditation with any health or “alternative” health body in Australia she wants the unfortunate victims who pass by to believe so. On January 27th when stories on the urging of removal of quackery courses from universities were in the press, Monika drops a telling comment.

Being unregistered Milka may have accessed hypodermics from Needle and Syringe Programmes (NSPs) provided under harm reduction services for users of illicit drugs. This becomes more compelling when we note Milka claims “junkies” who she unwittingly hired were responsible for the unsterilised equipment.

Milka runs a Deli full time and has a smattering of customers whom she treats in filthy conditions in sheds. Thus, this story blaming missing “junkies” is unsatisfactory. Even if we entertain it (in fact even if we don’t), health authorities must face the reality that syringes used on patients may have been second hand. Milka owes it to her “patients” to ensure they seek testing for Hepatitis C and HIV. How were the sharps disposed of? What reason did Milka give to NSP staff for accessing equipment?

Of course to Milka, this is all nonsense. Despite an ongoing civil case seeking damages she claims it was all “dealt with years ago”. She is the victim in all this we’re told. The Universe trusts and loves her and in the dance of the Cosmos, that is all that matters.

Fortunately she was pulled up in June 2009 during the Inquiry into bogus, unregistered and deregistered health practitioners.
The Inquiry received one written complaint about Ms Monica Milka. It alleged that Ms Milka had:

As the wife of one of Monika’s victims told the Inquiry [page 42]:

In 2005, my husband, Ross, was diagnosed with cancer of the bile ducts. After surgery and various courses of chemotherapy and radiotherapy treatments failed to halt the diseases, my husband sought the help of Monica Milka who did ‘alternative therapies’. Monika assured my husband that she could cure him and commenced treating him with all types of sprays, medicines and injections. The many injections she gave to his stomach were to ‘kill the worms’ that were causing the problem but in fact left him very sore. She also took photos of his eyes and then showed him those supposed images on a computer screen, pointing out the ‘areas of improvement’ and telling him how well he was doing. Ross paid Monica over $500 per week. Initially he paid by visa card so received a receipt for this payment but later on he began to pay cash and no longer received any receipts.

Milka’s insouciance to her earthly responsibilities could not have been clearer:

The Committee received written correspondence from Clark Radin (lawyers) representing Ms Monika Milka. In their letter, Clark Radin requested that copies of all oral and written submissions received by the Committee against Ms Milka be provided to them… The option to view the material was not taken up by either Ms Milka or Clark Radin.

There’s little doubt Monika Milka and Monika’s Entity is a danger to the community. She is completely without remorse and appears oblivious to the notion of responsibility. She makes a living from thieving – scheming and scamming innocent and vulnerable Aussies, all of whom will be left worse than before encountering her. The only constant is the never ending barely comprehensible rambling about cosmic vibes and universal energy that can kindly be referred to as the rantings of an insane witch.

Not only is Monika Wolverine Milka a walking talking example of what pseudosciences must ensure they can control, she presently acts as a voice for their place in university. Apologists like Kerryn Phelps need far more than a few placebo studies to make this disease go away.

Somehow I doubt Milka is as loving and cosmic as she pretends. I hope the full force of the law hits her hard and hits her soon.

The Law of Attraction shall we say ♥