Senator Bob Brown’s resignation as Greens party leader and a Senator does not erase a much needed explanation for his “bizarre outburst” in defence of The Australian Vaccination Network, it was revealed within minutes today.

A spokespig for Stop the AVN said that Brown’s “manifest cowardice” in using Parliamentary Privilege to, “rattle off every crackpot, debunked and discredited conspiracy theory linked to vaccines – including the cause of AIDS – was one of the lowest points in Australian political history”.

The naked spokespig with wings, appeared to be made of cast iron and carried a copy of The Skeptic. He quickly handed out sections of a 1997 Tasmanian State Parliament discussion on vaccination policy recorded in Hansard to reporters outside Parliament House (see below).

Asked whether this was a case of sour grapes over The Green’s long standing criticism of iron mining, or mining industry opposition to the carbon tax, the unusually handsome spokespig bristled, insisting:

My constitution has absolutely nothing to with the evidence on the subject of vaccination. And that evidence shows that Brown was wrong then, and his comments left undefended on record, are even more ridiculous today. I might be a Cast Iron Flying Pig but would suggest the evidence for vaccine efficacy and anthropogenic climate change are subject to similarly irrational opposition. 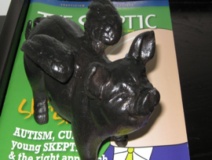 The spokespig went on to say that he was definitely not a climate change sceptic, but an “evidence seeking skeptic”. It was thus axiomatic that Brown should be able to judge the integrity of information and that his 1997 comments actually made a mockery of his so-called “scientific understanding” of global warming. “As a trained medical doctor he makes a very good doorstop”, intoned the spokespig.

When one reporter pointed out that Cast Iron Flying Pigs actually WERE doorstops, and that her elderly grandmother had one, he maintained that he was thus highly qualified to judge.

“The problem is that without verification, (then) Senator Brown cited the AVN’s magical “300 Reports of Serious Adverse reactions from vaccines, [of which they claim] not one was reported from the doctors involved”. Today 14 and a half years later, the AVN are yet to produce one of these properly verified reports, the spokespig announced to gasps of disbelief.

All Australians have a right to clear, unambiguous feedback on matters of public health, insisted the spokespig. “Bob Brown has failed in that respect, and his smokescreen of reasons for resignation can’t hide the fact that he’s now running scared from Stop The AVN”.

Bob Brown did not return phone calls this afternoon.