When we think of chiropractic and Equidae, it’s usually unicorns that come to mind.

The search for the chiropractic subluxation has been as fruitful as the search for the unicorn. In fact perhaps less fruitful, as we know with a high degree of accuracy what the unicorn looks like. Yet with the chiropractic subluxation our fairy tale is limited to conjuring mystical malaise or blaming dastardly disease as the work of this elusive evil. 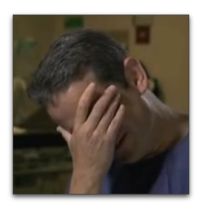 Do not be alarmed. This man has not seen a unicorn.

Rather, he had just been told that chiropractic subluxations

involve some type of “static” in the spinal cord.

Doctors (real doctors) report that he made a full recovery

after his palm was removed from his face.

Interestingly enough, whilst chiropractic teaches that areas of subluxation are invisible and can be “detected” only by the presence of symptoms, Simon Floreani, erstwhile president of the Chiropractors Association of Australia, has other ideas.

Check out the Catalyst video below at 1min, 45sec. Using the apparently magical Activator – or the “stick that goes click” – on an infant, Floreani announces:

Areas of subluxation that I can feel there, that are immediately improved after you adjust it like that…

You can read more about the Sonic Screwdriver-like Activator here in The Medical Observer. Just be prepared for some tongue in cheek observations. In September 2011 it was reported in Australian Doctor that the Federal Government had been asked to investigate both the Activator and “the Nervoscope” as they had been reported as having, “no biomechanical or physiological effect and cannot diagnose or treat any health condition”.

Fortunately, whilst new-age chiropractors continue to push their ineffective devices, practices and claims onto an unsuspecting public, genuinely motivated supporters of evidence based medicine are busy exposing their scams.

Check out the videos below to see just how devoid of facts claims made by the resurgent followers of Daniel David Palmer, really are. And keep an eye out for Simon and his zebra.

Floreani’s penchant for cutting his own path may help explain why he has chosen the zebra over the unicorn. 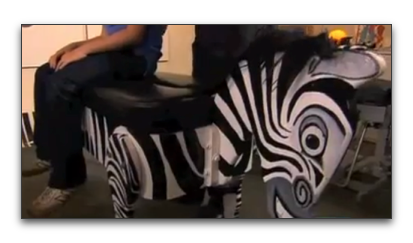 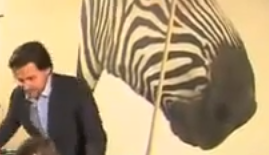 Floreani seems to be watched over by a zebra

2 thoughts on “Of chiropractic tripe and the odd zebra stripe”