Comparing the eternally positive reflections of Jessica Ainscough with the reality of her recent passing from epithelioid sarcoma just two days ago, one cannot help feel somewhat disturbed. The ABC website has a leading description of Jessica’s struggle;

Jessica initially underwent isolated limb perfusion. Her left upper limb was treated with chemotherapy. Initial signs were positive but within a year or so her tumor had returned. The surgical option she then faced involved amputation of not just her arm but the shoulder also. This disfiguring alternative may have offered some hope and Orac writes that before the choice of perfusion arose, Jessica may have been preparing herself to face the surgical option [2]. Ultimately she didn’t decide on surgery. A disturbing cornucopia of woo, “positive affirmations”, “cancer thriving”, coffee enemas, “the tribe”, etc… and surrendering to what the universe had in store led to The Wellness Warrior. Jessica also took on promoting the widely discredited quackery known as Gerson Therapy with gusto. You can read what Cancer Council Australia write about Gerson, and also check some citations here. This summary is from an article in today’s news.com.au;

Australia’s leading cancer organisations do not endorse Gerson therapy as a means of treating cancer. The National Cancer Institute says: “Because no prospective, controlled study of the use of the Gerson therapy in cancer patients has been reported in a peer-reviewed scientific journal, no level of evidence analysis is possible for this approach. “The data that are available are not sufficient to warrant claims that the Gerson therapy is effective as an adjuvant to other cancer therapies or as a cure. At this time, the use of the Gerson therapy in the treatment of cancer patients cannot be recommended outside the context of well-designed clinical trials. Cancer Australia says there is “little evidence” that alternative therapies are effective in cancer treatment. “Most have not been assessed for efficacy in randomised clinical trials, though some have been examined and found to be ineffective.” If you’d like to know more about cancer treatment in Australia, visit cancer.org.au or call 13 11 20.

The scale of denial Aiscough was in for so many years comes across in her piece published on ABC’s The Drum website. Eg;

How have I managed to escape the frail, sickly appearance that is so firmly stamped on the ‘cancer patient’ stereotype? I refused to follow the doctor’s orders. […] Our bodies are designed to heal themselves. It is really that simple. Our bodies don’t want to die. […] This is the basis of natural cancer-fighting regimes. While conventional treatment is hell bent on attacking the site of the disease and destroying tumors with drugs, radiation and surgery, the natural approach aims to treat the body as a whole. […] This stuff isn’t new. Reading Plato shows that holistic modalities have been understood for centuries: “You ought not to attempt to cure the eyes without the head, or the head without the body, so neither ought you to attempt to cure the body without the soul… […] …I will spend three weeks being treated at the Gerson Clinic. The basis of the Gerson Therapy is a diet, which includes eating only organically grown fresh fruits and vegetables and drinking 13 glasses of freshly squeezed juice per day in hourly intervals. The idea is to strengthen the immune system and load you up with heaps of minerals, enzymes, beta-carotene, Vitamins A and C, and other antioxidants that attack free radicals and ultimately the cancer.  According to the late Dr Max Gerson, if you can stick to the strict regime for a minimum of two years, Gerson Therapy has the ability to cure cancer like no drug can. Alternative treatments like Gawler and Gerson offer patients hope, choice and understanding. They also offer them a cure, not just remission. To me, that sounds like the much more attractive option.

The Cancer Council of Victoria has some great advice on the topic, “How will I know if claims of a cure are false?”. On page 39 of this booklet they note that the dishonest and unethical may;

Comparing Jessica’s beliefs and a small amount of advice from Cancer Council (Victoria) indicates Ainscough was entertaining a range of dangerous ideas about what both caused and might treat or even “cure” her cancer. Plainly the Cancer Council would reject Gerson Therapy based on its major traits. Tragically Jessica’s mother died from breast cancer after following her into trusting the disproved belief system. Orac writes in October 2013;

From what I can gather, it is the story of a death from quackery, a death that didn’t have to occur. Even worse than that, it appears to be a death facilitated by the daughter of the deceased, a woman named Jessica Ainscough, who bills herself as the “Wellness Warrior.” It’s a horrifying story, the story of a woman who followed her daughter’s lead and put her faith in the quackery known as the Gerson therapy.

An excellent blog is The View From The Hills by Rosalie Hilleman. It is an excellent examination – through postulation, questioning and evidence – of Jessica’s extensive deception and manipulation of her readers in order to maintain two illusions. One being that Gerson offers some efficacy. The second being that Jessica’s epithelioid sarcoma was not progressing with the morbidity expected for that condition diagnosed at the time it was.

EDIT: Jessica insisted she was “thriving”. Readers could easily be left with the impression that Gerson Therapy is effective. All the more because most don’t associate “cancer” with the bright, positive Jessica. This is why questions raised in The View From The Hills were and are so necessary. Gerson was actually doing nothing. In reality her cancer was markedly indolent – very slow to progress.

But it was progressing. It always was. Clinically, just as cancer of this type does progress. And now like her mother, Jessica Ainscough has died from cancer. 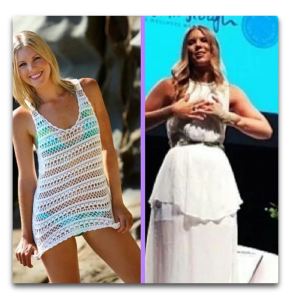