Michael Leunig was a guest on ABC News Breakfast to chat about his new book Musings From The Inner Duck, his role as a cartoonist and the impact of his commentary both political and social.

It wasn’t long at all before discourse turned from reflections on the Leunig duck to Leunig’s support of quackery. Particularly his April 15th cartoon in response to Scott Morrison’s removal of up to $15,000 in tax payer funds to parents who seek to claim “conscientious objection” to vaccinating their children.

The awful piece of nonsense from our 1999 National Living Treasure firmly ran the ignorant antivaccinationist banner up Leunig’s flagpole. One doesn’t say so lightly, but the cartoon and subsequent interview ticked all the worst of the anti-vaccine boxes. I’ve also no doubt Leunig would have kept digging had he more time. Headed Some mothers do ‘ave ’em the piece continued;

They have maternal instincts
That contradict what science thinks.
They stand up to the state:
A mother’s love may be as great
As any new vaccine
That man has ever seen 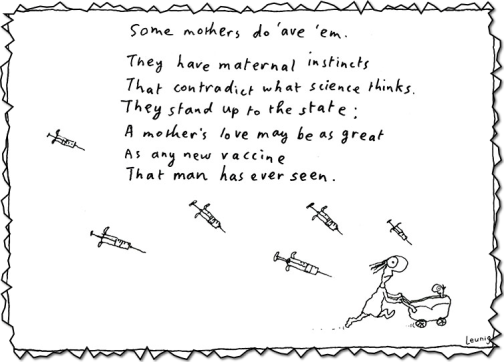 Problems with Leunig’s thinking come across in the text.

Mothers have maternal instincts that contradicts what science “thinks”. I realise a rhyme is important here but there’s no reason why mothers can’t have maternal moods that contradict what science concludes. Because science must not drift off into thinking or feeling or musing. It follows a strict set of processes designed to invite replication and strident attempts at falsification. This doesn’t involve just one, two or a handful of variables. Multiple factors help form hypotheses in this process until a scientific consensus is formed. In the face of new evidence and conclusion a new consensus is formed in the same way.

Nor is this a matter for the famous Leunig “whimsy”. If we honestly made way for this new antivaccinationist insistence of maternal instinct ruling over what science “thinks” (because ‘science always changes its mind’) we would be beset with tragedy. Recent revelations about the conduct of midwife Gaye Demanuele give valuable insight as to what is at stake when ignorance and/or defiance clashes with evidence based health practice as recommended by national health experts.

Speaking of “the state”, Leunig tells us these mothers (who let’s face it are either part of, or misinformed by the anti-science in medicine chapter) also “stand up to the state”. Perhaps he’s referring to the reckless and abusive decisions they make in denying their children the protection of vaccination. He winds up letting readers know a mother’s love can apparently create antibodies and/or protect from vaccine preventable disease as well as any vaccine.

Underneath the text is a plainly shocking cartoon. A mother sprinting, baby in pram, away from giant flying syringes. It seems like the cartoon version of those Photoshopped images favoured by Natural News, Mercola, Age of Autism and other junk sites that depict lines of crying children or babies jabbed with multiple syringes.

“It does seem to be an odd thing to assert Michael Leunig, that a mother’s love may be more beneficial for a child than a vaccine”, offered Virginia Trioli.

Leunig tries to dodge this claiming he is “not taking a position publicly”… but is concerned that the maternal instinct is being asked to step aside and accept what the state is saying. Virginia challenges his claim of not taking a public position. Leunig works his way around to asking “…if we should sweep aside those mothers who in great conscience, intelligence and research feel they just can’t go ahead with this. Should we demonise them? Should we criminalise them? Should the whole society make them feel a pariah? That the traditional work of the cartoonist is to stand up for the improbable, the minority which seems to be of true heart and sincerity”.

“Isn’t it an issue about science?”, Virginia asks.

“Well science is… it depends on whether you believe science is the final say on everything”.

“Most people do”, offers Michael Rowlands.

“Well they did when they had Thalidomide…”, Leunig replies bizarrely with confidence, probably blissfully unaware what a cruel and ignorant fool on this topic he has just revealed himself to be. Dragging out the Thalidomide card in this instance is thunderously immoral. All antivaccine champions ignore the fact that drug trials and testing were forever changed for the better.

Virginia baulks at this nonsense and pulls the cartoonist up. “Ooh, that’s a difficult comparison, because there was a concerted cover-up about that for many, many years, and such corporate malfeasance that it’s probably unparalleled in medical history, so you’re not asserting something similar to that are you?”

And then it happens. The man who draws ducks proclaims, “There is a science against vaccines also”, masterfully ignoring that he just informed us that “…it depends on whether you believe science is the final say on everything”.

As Michael Rowland observes at this point, “It’s not science Michael”.

Leunig denies upholding “a lot of evidence (against vaccination safety)” and warns beware the crowd. He contends that science is not complete [yawn] then just to prove he’s reading lots of antivaccine dreck, poses “… and what is this impulse that’s universal, it’s not freakish but I’ve seen a lot of very intelligent women and parents hold a really grave concern… and there are really bad consequences of some vaccinations…”. He thinks the science is incomplete. Disagrees with the finding Wakefield is a fraud.

Delightfully, with the feel of a eulogy, Virginia’s next sentence is “But as someone who has been much loved as a cartoonist can I just show you one response to your cartoon”?

It’s a tweet from Hannah Gadsby (@Hannahgadsby) and reads;

After years of enduring Leunig staring at her, the duck finally spoke “I can’t give you the benefit of whimsy today. You’re a dickhead”.

Leunig is now worried that this means “so we don’t tolerate the outsider voice that says the improbable. That’s what my job is, it’s not to march entirely with science it’s to be the improbable”. He suggests Virginia and Michael should be getting fired up about criticism of the antivaccination lobby.

“What is this fierce anti anti-vaccination… why so emotional…?”.

Dismissively, the man who draws ducks reckons “If we cared about public health we wouldn’t design cities like this, …terrible television, dreadful media. Public health is in disarray at so many levels and all we’re worrying about is this little needle”.

You know that little needle – perhaps the greatest medical breakthrough of all time. Virginia tries to see him off.

“But I’m not standing against vaccination”, Leunig lies as all antivaccinationists do. “It’s this thing as a matter of conscience”.

He was a C.O. to the Vietnam war so knows what he’s talking about he finishes.

The biggest problem – or a very big problem – with Leunig is that he’s had a long time to work his way through the science around Wakefield’s fraud. Indeed, vaccine science in total. This was Leunig on January 29th 1997; 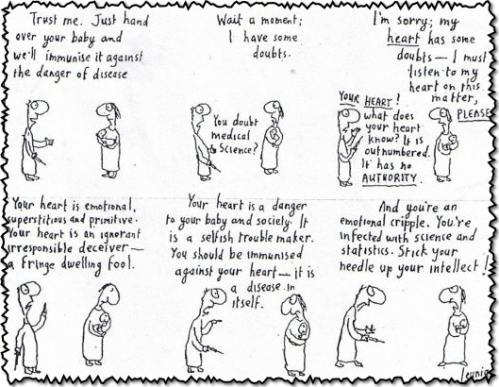 This cartoon pushes the old and rather pointless defence of pseudoscience that argues “science doesn’t know everything”. Or rather, it’s that defence on steroids. Unapologetically we’re asked to believe a cruel and arrogant medico has jettisoned any capacity to be humane or understand the whole person as a patient and reacts aggressively to the mother. Nothing could be further from the truth, and no reaction could better impede the aim of vaccinating the mother’s baby. In fact it’s quite silly in that any medico so dangerously constrained by medical science would point out the heart is a pump and emotions, superstitions are seated in the brain. But the point is taken. Doctors and medical science are pathologically removed from understanding emotion, preferring to belittle human nature as some primitive throwback to be “immunised” against. “It is a disease in itself”. This nasty, inaccurate and combative message, dreamt up by opponents of medical science, is entirely without merit.

Thirteen months later Wakefield’s infamous fraud was published and public health has suffered immensely ever since. Largely thanks to fools and egos like Michael Leunig. To sit there and say “there is a science against vaccination also” and that he has detected “a universal impulse” and is standing up for intelligent people who have researched and hold “grave concerns”. These poor people treated as pariahs or criminals and pushed about by the state. The softly spoken champion for the maternal instinct. He’s not antivaccine – nooo – but just doing his job. What was it? Oh yes, “it’s not to march entirely with science it’s to be the improbable”.

Well I find it improbable in the extreme that Leunig had such views 18 1/2 years ago and just happens to have them again today because it’s “his job” to worry about one of the most dangerous and most cruel antiscience and antimedicine cults at the present time. Leunig is an antivaxxer, cut from the same mold of them all.

His duck will now be remembered for its quackery.