In early August last year the Australian Vaccination-skeptics Network held one of many Australian screenings of the fraudulent, debunked anti-vaccine film Vaxxed at Hawthorn town hall in Melbourne Victoria. The director of this nonsense is disgraced former gastroenterologist and persistent enemy of public vaccination, Andrew Wakefield.

At this event the AVN hosted a rogue Melbourne GP who, using bogus claims, was helping parents circumvent No Jab No Play legislation. With video of the GP published online, the outcome was immediate revelation of his identity. Three weeks later Dr. John Piesse faced suspension by the Australian Health Practitioner Regulation Agency (AHPRA). At that time it was reported he “vowed” to continue placing innocent children and the community at risk until he was indeed suspended. Not long after he agreed to stop practising while AHPRA investigated his conduct.

By mid September he had his licence suspended. The ABC reported;

A Melbourne doctor who has been under investigation for his anti-vaccination stance has had his licence to practise suspended.

He had agreed to stop practising temporarily while AHPRA investigated the matter.

But the Medical Board of Australia’s Immediate Action Committee met on Thursday and decided to suspend his registration while the investigation into his practice continued.

An excellent and comprehensive summary of Dr. John Piesse may be found at Diluted Thinking.

Because of the danger posed by Piesse and an unknown number of other GP’s who may be engaging in similar conduct, new No Jab No Play laws were recently announced by Victoria’s Minister for Health, The Hon Jill Hennessy MP. [PDF] 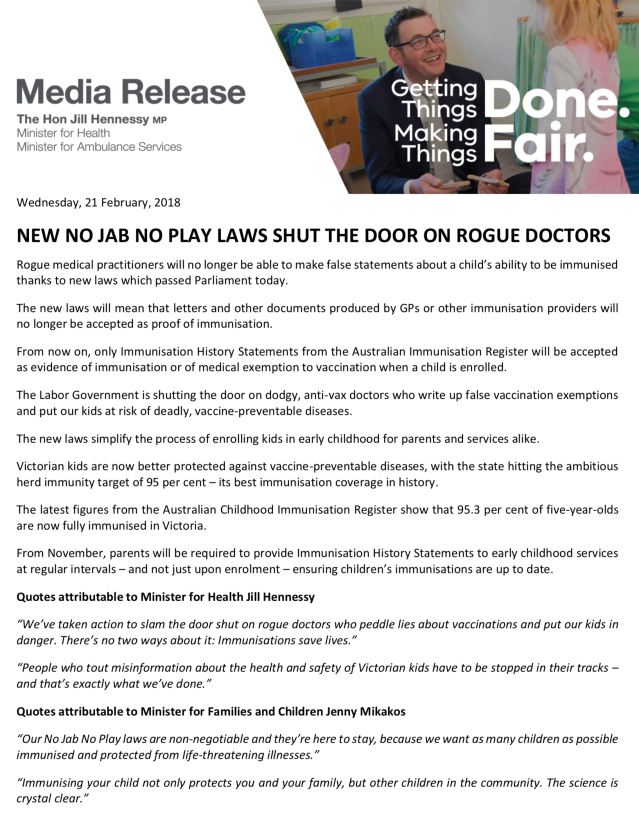 The damage done by the anti-vaccination lobby across the developed and developing world continues. Their lies cost lives and quality of life. In addition they promote angst for innocent parents and attack hard working advocates – who may be grieving parents themselves – with relish.

It is now 20 years since Wakefield published his fraudulent paper in The Lancet contending a link between the MMR vaccine, bowel disease and autism. It was ultimately described by The Lancet’s editor-in-chief as “utterly false”. A 2004 investigation by Brian Deer of Britain’s Sunday Times uncovered enormous financial conflicts of interest. Wakefield was exposed as a liar and fraud and struck off the UK medical register. Astonishingly three dozen charges were found proved. Almost all of his fellow authors withdrew their names and support from the fraudulent paper.

With thunderous arrogance Wakefield “rejects” all of the findings against him.

Years of research failed to reproduce or uncover phenomena similar to his claims. Wakefield continues to push his fraud from the USA, profiting now from the global Conspiracy Theory movement, destroying public health and what is left of his callous character as he goes.

One understands Vaxxed is simply his most recent project. If and when more follow, as has been suggested, they too will be debunked.

Recently BBC 4 produced an excellent review of the anti-vaccine movement titled, In the Wake of Wakefield (BBC).

Twenty years ago, in February 1998, one of the most serious public health scandals of the 20th century was born, when researcher, Andrew Wakefield and his co-authors published a paper in the medical journal The Lancet.