From the BBC’s Science Betrayed, March 16th 2011. Dr Adam Rutherford does a splendid job of investigating the scandal and ethical breaches that led to the greatest medical and public health related disaster in the post penicillin era.

Recently there’s been a push by anti-vaccination lobbyists and those horrid folk from Age of Autism to argue that the BMJ committed fraud. They have a particular angle on Brian Deer and the entire campaign smacks of revenge borne of a total lack of evidence. Mike Adams is another source of woe begotten opportunism peddling this nonsense. Meryl Dorey is piping their tune in Australia despite originally screaming Wakefield’s disclaimer in his defence: “No association proved with MMR” – something Wakefield sticks to when questioned.

“We never said there is a link to autism”, Meryl Dorey of The Australian Vaccination Network lied as Wakefield’s obliteration became complete. “Just to bowel disorders”. Of course, they quickly changed their tune to line up with the rest of the conspiracy cranks worldwide.

I feel like saying they make me sick. But that’s nonsense. In truth, they make sick children even sicker. What I find truly bizarre is that “anti-vaccination hero” Andrew Wakefield, filed patent for monovalent vaccines nine months before publishing his paper. Just as unethical is monovalent vaccine administrator Dr. Richard Halvorsen, author of The truth about vaccines. He is paid hundreds of dollars per shot. If anybody schemed to push vaccines it is these men.

In The Lancet article, Wakefield et al. wrote, “we did not prove an association between measles, mumps and rubella vaccine and the syndrome described”. Yet he wrote a letter with Richard Barr one of the lawyers paying Wakefield, and representing anti-vaccination litigants, before beginning the study. Written on June 6th, 1996 it described a vaccine induced autistic and intestinal disorder. This was over two weeks before selecting the first child to be “studied” as part of The Lancet sample. It included;

Children with enteritis and disintegrative disorder, form part of a new syndrome. The evidence is undeniably in favour of a specific vaccine induced pathology.

Hired by lawyers with a predetermined agenda, inventing a vaccine induced syndrome at the behest of anti-vaccine activists, selecting a sample picked by the lawyers and lobbyists, filing for monovalent vaccine patents well before publishing his work, denying any link in print, suggesting this very same link in a press conference, making plans for a “treatment” centre for his pretend syndrome that he would run…

All to be abandoned by most co-author’s, struck off the medical register as callous and unethical and for his fraudulent “research” to be retracted. There can be no doubt. Andrew Wakefield is a fraud and those seeking to exhume the corpse of this despicable scam have embarked on yet another course of unique child, parent and indeed social abuse.

Although there’s a plethora of articles debunking this awful business, here’s some you may like to read. 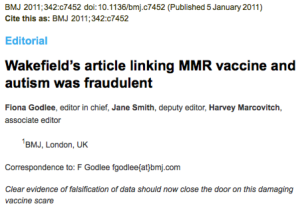 10 thoughts on “Andrew Wakefield and the MMR fraud: Science Betrayed”