There is less than 1 per cent of complaints against school chaplains across the whole country which is absolutely minuscule. The future welfare of our kids is at stake here, we believe it’s that serious and not only will we be fighting it but we have 30,000 statements of support from parents and supporters of the program.

John “necrophilia” MacKay. Remember that nickname used by the British Centre for Science Education. Because just recently the world weary evolution denialist, and one time accuser of necrophilia, Satanism and witchcraft against the personal secretary of Ken Ham (of Creationist Museum fame), John MacKay of Creation Research was “educating” Aussie students.

He was invited to Gympie State High School at their chaplain’s behest. MacKay doesn’t just teach Creationism but also teaches via his biblical wisdom of Genesis, Romans, Corinthians, Paul, Matthew and Mark that homosexuality is a sin and that marriage must be of one man and of one woman for life. MacKay has no theological, psychological or proper teaching qualifications. Much like the chaplain that invited him.

But don’t worry! Tim Mander assures us chaplains are just as good as professional counsellor’s, in managing the high risk, self harming and prone to suicide group of students who may be struggling with sexual identity. MacKay can always distract them with his hatred for feminist “clones” or his belief that Satan’s pet project evolution caused 9/11. Or wax lyrical about the Aussie Creation Museum he wants to build.

Education QLD have, of course, defended his invite and lecture.

MacKay is an original co-founder along with Ken Ham and Carl Wieland of the Australian Creation Science Foundation – CSF. Then onto that dumping ground for all things offensively impossible, Answers in Genesis. Ham later set up AiG, USA. There was a consequent falling out in early 2006 over international kinship and the meeting of business standards. The US and UK teams shot through keeping the name AiG. This left the Australian, NZ and Sth. African branches to become Creation Ministries International – CMI.

Erstwhile buddies of the now-in-jail creationist Kent Hovind we might get an idea of their habits for earthly legal compliance. The real reason for falling out was money. Money made from selling magazines and dirty tactics over distribution list control. A solution was made after the US court of appeals for the 6th circuit ordered CMI and AiG to arbitrate over international affiliates and copyright, in April 2009. Nonetheless before this occurred, CSF (AiG) and John MacKay (CMI) fell out seriously due to the aforementioned dynamics. Things got a tad bizarre. Which, given the crackpottery these guys make up for a living is perhaps expected. Back in June 2007 Duae Quartunciae wrote;

In brief, MacKay started accusing a CSF staffer, Margarent Buchanan, of witchcraft, Satanism, and necrophilia with her dead husband. There was never the slightest basis for these accusations; apart from “discernment” by MacKay. MacKay made an ultimatum that either that woman left, or he did. This was a problem, because MacKay was so important to the group; but in the end MacKay resigned and went his own way. He was also excommunicated from his own Baptist church for the whole affair.

Update: There is just so much offence oozing from MacKay’s conspiracy cum religious zealotry rant of a web site it demands mention. Follow climate science denialism – “Climate Fraud as Aussie Govt ( June 2011) accused of blatant climate lies… Climate taxes coming Aussie Prime Minister and atheist, Julia Gillard, is increasingly confident… recent studies of Pacific Islands have shown the islands are remaining stable in size or even growing….” [Accurate explanation] Lilly Fossils: “Sea lilies… have joined the ranks of living fossils which deny evolution and point to Gods creation ‘after their Kind’,… useful in dealing with the widespread belief that fossils take millions of years to form.”

Or Untold secrets of planet earth: Dragons… real powerful, “documentable”, defensible connection between the dragons of ancient times and the dinosaurs we know so well from fossils… Secrets never before published – over 20 new examples of dinosaurs in ancient artwork... More on fossils: “Geologists like to explain this (mixtures of fresh/salt water and land plants) on the basis of a perpetually moving delta and flood plain river system which lasted for millions of years. However mixed marine plant and fresh water species are far easier explained as (Noahs) flood debris.”

Everywhere is Donate, Donate, Donate. But perhaps the most disturbing given this chap is in effect passively supported by the education department coupled with Mander’s bold claims of needed and wanted chaplaincy, is this link between Brevik and Charles Darwin via the invented term “kill or be killed”. Darwin’s theory says no such thing. MacKay is insulting students in the most offensive way by claiming Darwin’s brilliant theory can be reduced to the rubbish of creationist simplifications and Social Darwinism.

His claim is clear. Teaching evolution is teaching students to kill or be killed and this is what guided Brevik. Thus the barbarism of literal biblical fundamentalism with genocide and virgin rape at Gods command is the answer. This nutter isn’t just an anti-science warrior, he has a crafted mock up moral objection to a gross misrepresentation of reality. What a bonus for our students. 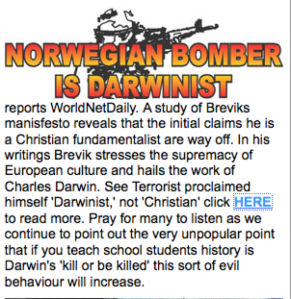 MacKay is the self described “International Director of Creation Research”. He’s actually the founder presumably diverting into this after CMI. You can follow a link on MacKay’s site – in the above screengrab – to a rather insane article claiming that Brevik didn’t claim to be Christian but rather “Darwinist”. It then proceeds to quote Brevik’s claims of being “100-percent Christian”, whilst inferring “Darwinism”. However, I may be biased and don’t want to tarnish John’s image. John MacKay can do that himself. Indeed he has offered his wisdom in creationist publications and online. Creation News 1997;

… the declared feminist desire to be able to clone humans, so [women] could dispense with men…

Can you imagine the results of feminist-controlled cloning? A planet full of cloned female offspring whose similar physical characteristics would react identically to the same conditions, i.e. get sick at the same time, have the same monthly syndrome, wear the same face, like the same colours and fashions. Such feminist clones would bore themselves to death at the same predictable age.

MacKay’s Creation Research website in the UK wrote about the 9/11 attacks on March 22nd, 2002;

…believers should not be surprised when things like this happen … The root cause of this increasing violence is sin – sin which is rooted in the refusal to glorify The Lord as the God who created the universe.

In recent western culture this refusal has been built around evolution and the denial of a god of any sort.

Coming on top of the ombudsman report of demonic possession beliefs in at least one chaplain, reports of fundamentalism and “covert” conversion, documented misleading of Australians over school acceptance, ignoring parental concerns, excessive evangelising, irrelevance to multi-faith schools and the Australian Psychological Society damning the programme as damaging to students, this is now quite ridiculous. Business as usual then.

Carry on… carry on…