Not long ago I suited up for satire and wrote about Package Insert Airlines. The fictitious airline that takes the view passengers must know of every adverse event to flying before making the “informed choice” to fly.

This was in response to Meryl Dorey’s proposal that the AVN will march on Canberra with demands. One of these is that all parents be given vaccine package insert information to discuss with a “health professional” before deciding to vaccinate their child.

Such a distortion of the reality of the risk-benefit of vaccination seeks to promote Meryl’s choice – not a parents choice. So it is with her recent publication of Definition of Adverse Events Following Immunisation on the AVN Facebook page.

It’s appendix 6 from the 9th edition of the Australian Immunisation Handbook. Yes, those same scheming government manipulators Dorey snorts at when facts get in her way. As antivaxxers dispute that immunity is gained from vaccines, Meryl swapped the word “immunisation” with “vaccination”. List of adverse events which can occur following vaccination. In her first comment GP’s were attacked over, “crying which is continuous and unaltered for longer than 3 hours”.

One member claimed this (3 hours of screaming) meant “almost everyone should be taking their screaming child back to the doctor after a vac!”. In the real world, this should have been gently dissuaded with a reminder that abnormal crying occurs in only 4% of cases. This information is actually on the same site as the adverse event list.

And when you do, [redacted], most likely, the doctor will say it’s perfectly normal and won’t report it! -MD

It kind of makes bizarre sense. Meryl can’t report the actual incidence of 4%, as that would mean acknowledging that doctors, nurses and more do report adverse reactions. Far better to invent malicious intent and advise members of that, when we’re talking “informed choice”.

You can see where this is going. Context is meaningless. Actual incidence and significance of adverse events or package insert information works against all that the AVN stand for. As I wrote last time, “This particularly immoral intent of Meryl Dorey’s overall scheme to sabotage vaccination in Australia is born of connivance of such intellectual paucity as to demand it be placed in context”.

The intent is to jettison any accurate notion of risk-benefit. It aims to falsely convey that vaccines are worse than the diseases they prevent. To mislead parents and burden them with irrational fear. Dorey would have you believe that if vaccines aren’t 100% perfect then they must be 100% dangerous.

What did that HCCC warning about The Australian Vaccination Network say again? Ah, yes:

Let’s take yesterday’s attempt to claim that MMR or the measles vaccine can by itself cause Subacute Sclerosing Panencephalitis (SSPE). SSPE occurs following measles infection in which the virus infects neurons and lays dormant. Although erring on the side of exceptional caution, SSPE is listed in Australia as an adverse event following immunisation so confirmation bias will play a part.

The fact that it’s listed does not mean SSPE from MMR or another vaccine is probable or even possible. It means the decision to remove it from listing has not yet been made.

It’s fair to say that incorrect conclusions were previously drawn in some very rare cases – and understandably so. Measles vaccines involve an attenuated live virus. With incomplete investigation, or those limited in scope, errors are made. Ms. Dorey just hasn’t caught up with the facts yet. Science may move forward at a crawl but antivaxxers seem to insist some aspects be frozen in time forever.

On a Facebook page Vaccines Uncensored that has since closed, Dorey wrote: 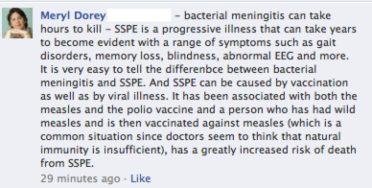 The polio vaccine reference Dorey later produced from whale.to also included claims of polio definition fraud along with AIDS, GBS, Leukemia and cancer, being certainly due to all vaccines. Where polio vaccination has been instituted globally, “reported polio infections show a 700% increase as a result of compulsory vaccination polio” the trusty reference informs us.

Meryl then copy/pasted a section quoting “Informed Parent” issue 4, 2001 which itself was quoting a 1970’s article on a large New Zealand outbreak of SSPE from 1956 to 1966. It was suggesting live SV40 was involved. There was no confirmation but it was believed the SSPE was related to the Salk vaccine. No such case has been documented again.

Dorey then copy/pasted two more paragraphs from either whale.to or vaccineinjury.info, goading the other member with “You can apologise later”.

One was a paper written by Belgamwar RB et al. 1997. Measles, mumps, rubella vaccine induced subacute sclerosing panencephalitis. It “presumed” an Indian child developed SSPE 15 years after she received MMR at 9 months of age. The reasoning is that the live measles virus in MMR lay dormant. Although incredibly rare at zero – 0.7 cases per million, these events seemed feasible.

Another explanation may be denatured or failed vaccines that, having no efficacy, left the subject vulnerable to consequent measles infection. Or SSPE from a pre-vaccine infection could be involved. This girl apparently had no history of measles infection, but this does not account for the potential of asymptomatic measles infection or incomplete records. Today it is accepted that a natural measles infection is the cause in these cases.

Risk of subacute sclerosing panencephalitis from measles vaccination. Pediatr Infect Dis J. 1990 by Halsey was another similar piece pasted in by Dorey. It posed the existence of “vaccine associated SSPE”, but failed utterly to show causality. Focusing on SSPE in an era when vaccination is preventing wild measles does not eliminate prior infection with measles and resultant latency as the cause of SSPE. Halsey practically admits to this oversight in his text, ignoring dormancy and stating, “we should pay attention to SSPE after inoculation”.

Well before these largely discredited papers, Zilber et al. in 1983 had already posed:

Most of the SSPE cases reported measles at an age significantly younger than that of the general population. This pattern did not change after introduction of antimeasles vaccination. Incidence was significantly lower (p less than 10(-9) in the vaccinated population than in the unvaccinated population. Occurrence of SSPE in some children who were vaccinated against measles could be explained by incomplete vaccine efficacy, or by older age at vaccination, which allows the possibility of prior exposure to measles. There was no indication that measles vaccine can induce SSPE.

The physiopathology of SSPE is not well understood. Yet evidence (October 2010) suggests that factors at play favour humoral over cellular immune response allowing viral dormancy in infected neuronal tissue. Exactly what this atypical immune response helps to explain in cases of SSPE is bound to be further elucidated. It was certainly not known to the authors Dorey has cited. What is clear is that measles vaccination does not trigger SSPE in those already infected by wild measles virus – as suggested by Dorey in the screenshot above.

The WHO note on the topic:

Available epidemiological data, in line with virus genotyping data, do not suggest that measles vaccine virus can cause SSPE. Furthermore, epidemiological data do not suggest that the administration of measles vaccine can accelerate the course of SSPE or trigger SSPE in an individual who would have developed the disease at a later time without immunization. Neither can the vaccine lead to the development of SSPE where it would not otherwise have occurred in a person who has already a benign persistent wild measles infection at the time of vaccination.

For those who wish to err on the side of extreme caution, it pays to remember that the Australian Immunisation Handbook is regularly updated. We should keep in mind that proposed incidence has always been of extremely small numbers. Maintaining the claim SSPE can be due to measles vaccination must now include the academic argument of what significance the phrase, “the available evidence”, as advanced by the WHO should be given.

Zero – 0.7 unlikely cases per million vaccines vs a certain 8.5 per million measles cases, was the older accepted risk-benefit. Following a late 2005 Journal of Infectious Diseases paper the measles induced rate of SSPE has been estimated at 6.5 – 11 cases per 100,000 infections. An increase of 7 to 13 times. This “disease vs vaccine” notion is akin to MMR induced encephalitis. Except the always dodgy evidence blaming vaccination for SSPE is in need of reinstating.

On a final note, it is outrageous for Dorey to be feigning concern over SSPE. There is only one answer to tackle SSPE: the elimination of measles via vaccination. Even then it’s estimated that a lag of up to 20 years or more will follow in which latent SSPE from wild measles will continue to emerge.

For about 6 years the new accepted risk-benefit of SSPE has been zero cases from vaccination and up to 11 cases per 100,000 measles infections.