“We’ve always wanted a balance on this issue, we’ve always asked for this… to allow you as parents to access both sides of this information”

These are encouraging words from Meryl Dorey suggesting a desire for bipartisan discourse.

Despite these words at Woodford those who have heard the audio or attended know there was no discussion but two presentations. One calm and factual. The other hyped, emotional and fictional.

Having heard Meryl’s new delight in accepting that “it’s good” we can discuss “what we disagree on” because of the importance in deciding “what’s the best way for children to stay healthy”, I assumed she would be delighted to embark upon the realisation of her new hunger for discourse.

A Silent – Defender of The Silence

It seems I was mistaken.

Since the excitement of Woodford I’ve sent Meryl two emails, tweets and invitations on Facebook.

There has been no reply. The Silence has fallen.

You see it appears Meryl and I disagree. Meryl said to a live audience that’s it’s good we can discuss it. Apparently the reality is far from that claim.

Others, as recently as tonight, have kindly raised this point during other online discussions with Meryl. Meryl was in full flight denying that her critics read “medical information” which prove her point and instead rely on “corrupt” studies.

Meryl had her attention drawn to her so-called debate forum. Then to my request. It seemed she wants to convey she had the last word:

This is not debate – this is propaganda.

But as seen below, Meryl did receive a reply. She refused to publish it. Censorship, again. Then, Silence! No reply. No riposte. No denial. Just… Silence.

Let us recap how The Silence came to fall. First was the post My Personal Request of Meryl Dorey.

I hope this finds you well and easing back into the swing of things for 2012.

I just thought I’d touch base to be sure you’ve seen my extended invitation to your good self, to post or send a riposte to my claims about your pertussis statistics analysis.

The offer to debunk the entire lot or just tackle a few pointers is still standing.

I imagine that the inability to debunk the key elements, might require on your part, some rather powerful argument/s were you to then continue to maintain your present stance on pertussis vaccination as a variable in pertussis notification. Particularly the oft’ cited large increase in 20 years, consonant with a 25% increase in childhood vaccination.

Below I show this to be false, fatally flawed and irredeemable as an argument.

It may thus follow that a retraction of your position on pertussis may be the next accepted step should you fail to adequately address these major points.

If some of your points can be sustained then only a partial retraction in your media release would be needed.

Finally, I would firmly suggest that no reply is an admission of failure and acceptance of my position in total as outlined below.

A directly contrary response is not acceptable.

A reply broaching other areas of pertussis vaccination – such as mutations in the MT27 and MT70 strains of B. pertussis – unrelated to the content below is also not acceptable.

I invite you only to address the material below.

If any points are unclear, then please don’t hesitate to drop me a line.

But nothing happened. The only punctuation was the horrible Silence. Just…. Silence!

I knew Meryl had read it. It was on Facebook too. Surely now something would happen. Something, anything to break that suffocating Silence. It filled my ears. It bounced off the walls. It woke me at night, mocking me with quiet neighbours and no faulty car alarms. Oh how I longed for the good old days. To be called “pond scum” for no reason, just like Meryl used to was my fantasy.

Two beautiful words to shatter the Silence. Pond Scum. Glorious Pond Scum. It was the oasis to my desert. The shooting star to my blackened night sky. The Betadine to my Tinea.

Then came the story of doctors sending away unvaccinated children. The measles cases. Parents refusing to vaccinate because their fears of autism were fuelling measles. I was seized by an idea. Crazy I know. Insane maybe. But I could take this Silence… this madness, no longer. I offered Meryl Double Or Nothing. Yes, yes, oh God forgive me I did it. Prove the autism argument wrong and I’d forget about the pertussis argument. That’s right! Win one fallacy and get another entirely ridiculous fallacy free. No cost. No strings. Just stop the Silence! I posted on Facebook, a shattered, shameful wreck:

It was met with… Silence! That was it. I was sure I would go insane. Insaner. As I lay tossing throughout the night enveloped in the cruel Silence a misty apparition appeared and through it stepped the most powerful Vaccine Myth of all time. Sir Vaccines Cause Autism, Knight of The Realm of Mythology stood before me. I fell to my knees weeping and trembling. “I am not worthy”, I mumbled. “I have failed to protect your very Mythness”.

“Oh bollocks, Old Bean… may I?”, he offered as he lay back on my bed with a long sigh. “Now how about you pop on the kettle, fire up the computer and play the audio of Meryl’s Woodford speech. Nothing regenerates us dead and non existent

“The Power of The Burning Stupid!”, I finished, fumbling with the keyboard until I heard the ghastly sound itself.

Over a cup of Earl Grey Sir Vaccines Cause Autism regenerated on The Burning Stupid and reminded me of what I knew all too well. The very existence of Vaccine Myths in The Realm of Mythology depends upon frequent retelling as Myths.

Any attempt to force their ontology toward reality with junk science and bogus claims was just as deadly for them as it appeared to be for us. Apparently he felt we were doing a good job. After reading Meryl’s Woodford slides, and laughing heartily over a few blog and Facebook posts, he stood up.

“Anymore Burning Stupid and I’ll be blind” he joked. “Now, here’s what you need to do dear chap. First, ignore the Silence. The more Silence you hear the more proof they have nothing to say. Do not fear the Silence for it is a sign of your victory and their cowardice. These creatures feed on angst, insult and repetition.

They define their puny worth by pretending to be in a battle with imaginary forces and without good folk to slander, would be lost. Have your say and be done with it. They are trolls, and we do not feed the trolls.

Tomorrow, follow up with another Facebook post to this Dorey woman. The next day an email and a tweet. I bet twenty bags of gold and 1,000 horses she will remain silent. She is already defeated. Hit her with facts. Facts are their enemy and their worst nightmare.

They will cower, cringe, lie and cry foul like the spineless creatures they really are. Never waver! Stop The AVN!”, he finished brandishing his sword, slicing my curtains in half and demolishing the veneer on my wardrobe.

“Farewell! Mwahaha. Mwahahaha”, he added dramatically before walking face first into my balcony door and falling back ungraciously.

“Sorry, that’s shatter-proof glass”, I pointed out. “Obviously in need of a clean and thus, looking just like your mist cloud which is actually over there”.

“I knew that!”, he said straightening his crown. “Very well. Mwaha, Tally Ho, you get the idea…”. And with that, he was gone.

So the next day I set about ignoring the silence, and posted on Facebook: 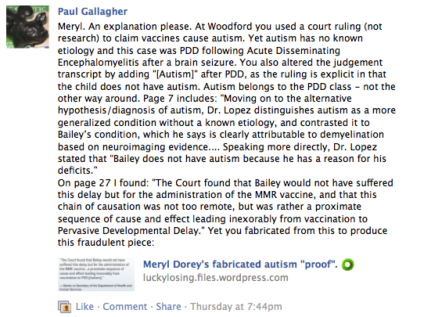 Then the next day, I set about emailing:

I trust this finds you well.

After listening to your Woodford presentation on autism and checking your slides it appears a number of gross errors were made, particularly concerning Bailey Banks.

The court ruling specifically states Bailey does not have autism. Indeed PDD is not autism – something that is basic knowledge.

I have significant concerns that you claimed his ruling supported your case of vaccine induced autism when this is not the case. Indeed the index page of the ruling clearly states, “Non-autistic developmental delay”.

On page 7, Dr. Lopez (acting for Mr. Banks) stated that “Bailey does not have autism because he has a reason for his deficits.”

Added to this are many other quotes also dismissing autism as a diagnosis, and I am concerned you have read these yet intentionally misled the audience.

Furthermore, the 83 VICP cases you cite are also not related to autism beyond the clumsy attempt by Pace Law School students under the auspices of vaccine scare profiteer, Mary Holland to argue “autism like symptoms” (despite having a clear aetiology) are in fact autism.

Only 21 reported cases were sourced from the VICP files. The other 62 phone interviews and communication questionnaires with biased parties, were not verified nor had ethics approval.

This leaves a total of zero cases. More so your slide only claims “associated” with, and the Pace School media rep’ Danielle Orsino has only ever argued a “suggestion”.

All in all, there is no evidence in your presentation to suggest a remote link between vaccines and autism.

Can you please clarify this asap.

Of course, as predicted there has been nothing but Silence! Then tonight Meryl Dorey excelled herself, proving what Sir Autism had said. They feed on repetition, insult, angst and are cowards with no evidence and no real purpose beyond insulting well meaning folk.

Tracey from Stop The AVN had caught Meryl out on her own blog, making false claims in a superior tone:

Meryl either agreed that she was indeed “proved wrong” or was simply unable to offer a cogent reply. She ignored every point and answered:

Tracey responds, yet strangely her comment still awaits moderation. The perpetual complainer of free speech suppression is still, as ever, hard at work censoring the truth. Tracey has generously mentioned my first request of Dorey.

Apart from the above, with some retweets there have been a few mentions on Facebook. Meryl Dorey has probably had over a dozen opportunities in as many days to acknowledge this. Presently her lack of words are answering all my queries.

In public Meryl seemingly wants to be seen to be legitimate, gushing pleasantly about discussion for the benefit of others. Take her up on this and the Silence remains. The persecution returns. There appears to be only one person Dorey wants to benefit. Despite the obvious humour that hovers over this patently ridiculous spectacle, there is no long term joke. Children get sick and die, AVN members are schemed out of money and Aussies are being misled time and again. But “it’s good that we can discuss it”.

Will the real Meryl Dorey please stand up.