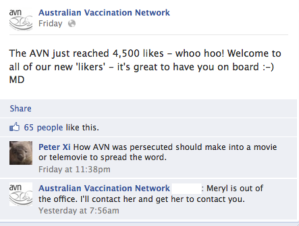 Oh. So there seems to be a comment missing. In fact it was the original comment, and here it is: 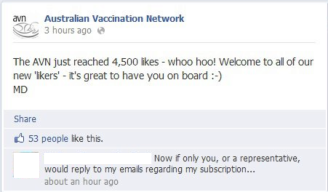 A paying member was censored. In fact their comment was deleted so that a fairly basic request to have emails answered could be hidden. The issue at play is that the AVN owe over $180,000 in magazines for which they have already taken fees. 11 magazines have not been delivered. Already 2 this year on the back of 5 last year. Yet this member appears to have sent at least two emails requesting clarification and they have clearly been ignored. Still the AVN website censors the fact it is in trouble. It is brazenly seeking new members claiming:

Membership includes 6 editions of Living Wisdom magazine (either hard copy or digital or both if you choose) and there are discounts available for 12 and 18 issue memberships.

If you pay extra as a “professional member” you get a “free listing” in the AVN magazine that does not exist.

In the conclusion of Making Censorship Backfire, co-authored by AVN supporter and full member, Dr. Brian Martin, we read:

An examination of cases where censorship backfires provides some valuable lessons in how to make this happen. The first important point is that the censorship should be exposed to audiences who will be outraged by the act of censorship itself or by the disproportion between the act (speaking out) and the censoring response (a heavy-handed attack). It is essential to have solid documentation, which means that only some cases of censorship can be exposed in this way.

It is important not to be intimidated. Censorship is often backed up by threats of what will happen if those who are censored do not acquiesce. It can be rewarding to see these threats as potential opportunities. By exposing the threats, the backlash can be made all the stronger. Targets of censorship need to be prepared for further attack – including personal invective – should they challenge the censorship.

It is unlikely wide exposure of this would help the member Dorey has ripped off. The information quoted above is interesting in that the best response would be to politely reply arguing that Meryl has had ample time to respond. Furthermore you have serious concerns about the AVN selling magazine subscriptions when overdue issues are now clearly unlikely to eventuate. This raises questions of Fair Trading and advertising under false pretences. It would be in the interests of all concerned if members could discuss this in an open forum fashion.

Of course, as has happened many times before, this member would be banned (if that hasn’t happened already) and the entry deleted. What follows is touched upon in the quote from Dr. Martin above. Dorey writes scathing and vicious reviews of individuals and her loyal members swoop in to attack them on other social media. Claims of being threatened and bullied and having to hire security to defend herself from bullies who don’t believe in free speech, health choices and your right to choose gradually take on a life of their own. The “backfire” works to Meryl’s advantage.

Dr. Martin’s writings on censorship are part of his much larger body of work on dissent, including struggles for autonomy and democratic rights for citizens oppressed by malignant governments. His work often has an artistic choreographed appeal that whilst interesting reveals an untested work in progress.

What is of interest to this article is his defence of antivaccination lobbyists censoring information in order to convey a fallacious and sometimes dangerous message of authority and accuracy to unsuspecting readers. As I suggested recently extremely serious questions can be asked about Dr. Martin’s moral and ethical conviction. This is only reinforced in finding that altruism is not a feature of his work yet saying and doing what one wants, when one wants regardless of the consequences, are features of those he willingly assists.

Muddying the waters further are his attacks upon community volunteers who have themselves raised dissent. The failure of government regulators to challenge what is a litany of legislative transgression, charity scams and antisocial behaviour by Australia’s so-called Australian Vaccination Network is undeniable. Devoted to attacking conventional medicine and vaccination, the group continued unimpeded for 17 years until individual activists raised dissent with government agencies.

Dr. Martin holds his PhD in physics but does not work in any related area. Apart from being president of Whistleblowers Australia, he is presently Professor of Social Sciences at the University of Wollongong. Thus use of the term “Doctor” is quite misleading in qualifying his skill as a social scientist. It is unclear if he has any requisite understanding of ethics or moral responsibility as it pertains to social sciences and indeed, society as a whole.

One may venture to suggest it is of course unsurprising then, that Martin also writes about “dissident scientists” who work in dissent of what he terms “paradigms”, disagreeing as to what theories are correct. We are left only to ponder how a physicist has found himself well versed in the mechanics of “scientific dissent” whilst at the same time defending the denial of evidence as if it were dissent.

In startling misunderstanding of the scientific method and the value of evidence he notes incorrectly in Grassroots Science:

Dissent is central to science: the formulation of new ideas and the discovery of new evidence is the driving force behind scientific advance. At the same time, certain theories, methods, and ways of approaching the world – often called paradigms – are treated as sacrosanct within the professional scientific community. Those who persist in challenging paradigms may be treated not as legitimate scientists but as renegades or outcasts. […]

For example, there are many individuals who have developed challenges and alternatives to relativity, quantum mechanics, and the theory of evolution, three theories central to modern science. […]

Western medical authorities at first rejected acupuncture as unscientific but, following demonstrations of its effectiveness, eventually accepted or tolerated it as a practice under the canons of western biomedicine, rejecting its associations with non-Western concepts of the body. […]

At the same time, some mainstream medical practitioners and researchers are hostile to alternative health. This is apparent in pronouncements that taking vitamin supplements is a waste of money or in police raids on alternative cancer therapists, the raids being encouraged by mainstream opponents.

Many proponents of alternative health say that mainstream medical science is distorted by corporate, government, and professional pressures. In this context, grassroots medical science presents itself as being truer to the ethos of science as a search for truth unsullied by vested interests.

Whilst one is grateful to Dr. Martin for seeking to identify certain dynamics it is apparent that his reinterpretation of the facts serves evidence denial and pseudoscience very well. Arguably “dissent” as he terms it here may well prove valuable to science. But one might venture to add it’s primary value has been in provoking the need to examine dissenting theories such that they ultimately bring about their own demise.

He has misrepresented vitamin therapy and acupuncture, falsely accused scientists of holding “paradigms” sacrosanct and completely ignored the value of randomised controlled trials in revealing the validity or not of “outcasts” theories. I think it’s fair to accept the final paragraph as an observation, whilst also noting it’s inexcusable to omit that the evidence favours this as a distorted conspiracy. Alternatives to medicine have flourished in Australia, crept into educational institutes and been subsidised by health insurance for many years.

It would be pointless to continue with examples, which go as far as criticising the dismissal of anecdotal evidence by mainstream science. For the purpose of this article this would include vaccines causing autism, SIDS, multiple sclerosis, inflammatory bowel disease, asthma and diabetes. I have chosen those examples deliberately. Whilst The Australian Immunisation Handbook specifically states research has constantly replicated no link Martin is supervising a PhD student conducting a literature review, but no research, who continually states vaccines have been shown to cause these conditions.

What is clear from the errors above and the Grassroots Science article in general is that Dr. Martin either has no grasp on the concept of evidence and it’s importance to science, or seeks to misrepresent application of the scientific method to the extent of devaluing it to the status of merely discerning an opinion. One cannot ignore the parallels between the tone of his writing and that of his PhD student Judy Wilyman.

Many have sought to have Brian Martin answer how he can ignore the devastating impact of his support of the AVN. As I noted recently this goes as far as making excuses for Ms. Dorey’s refusal to engage in scientific discourse with those who seek to challenge many of her claims. A substantial amount of his work claims to expose censorship and the tactics of those who refuse to accept “dissident” or “grassroots scientists”.

Thus it is deeply troubling that he defends Ms. Dorey’s censoring of material. More troubling is his making excuses for Dorey’s refusal to accept to enter into discourse as a “grassroots scientist”. Yet most bizarre is his championing of Dorey actually censoring material to sabotage engagement as a “grassroots scientist” – and actually blame this on those who were censored despite them offering Dorey an avenue to provide evidence.

Consider this recent censorship by Dorey. It served to censor the truth and defend several demonstrable errors. In Martin’s view Dorey has no need to engage because people have “attacked” her. Despite this being a self serving interpretation, what it demonstrates is the perpetuation of misinformation. This is exactly why individuals have raised concern about overlap as an academic, an advocate for truth in evidence, the supervisor of Judy Wilyman and defender of Meryl Dorey.

This post below appeared on AVN’s Facebook page with the following comments. The first from Dorey makes the head spin. There is only one type b strain of Haemophilus influenzae (called Hib). Yet she informs readers that the Hib vaccine caused an increase in diagnosis of other types of Hib caused by yet even more Hib strains. Later she mentions “Hib (all strains)”:

Later this reply was added: 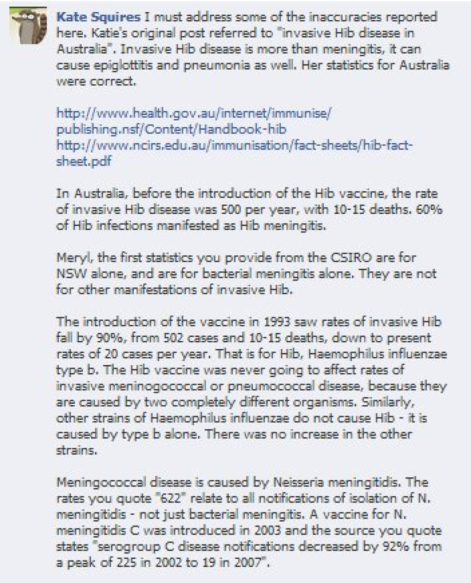 And yes, it was part of the thread:

Now if you pop back you’ll find it has been deleted and the other poster to take issue with Ms. Dorey’s creativity has now taken issue with Tristan’s rather divisive “us” reference.

The individual censored is also a member of the AVN and yes, is also wondering whatever happened to the magazines promised so long ago. Is this honestly how paying members are treated by Meryl Dorey? If so then one must begin to wonder exactly how Dorey and Dr. Martin are so certain that anonymous threats apparently come from people who have not been schemed, dismissed and discarded.

There appears to be little doubt of a significant conflict of interest. Martin is well aware of and extremely deft with tactics used to deflect the problems noted above. He is defending censorship and fraud at the AVN and his student has an exclusive history of publication bias. More recently Martin himself has distorted data by selectively using a misrepresentation of usual chatter on the Stop The AVN Facebook page. The aim – as he himself offers above – is to shape the public perception of those who challenge Ms. Dorey in such a way as to vilify and defame them.

As time passes I’ll endeavour to look closer at Martin’s work attacking those who essentially accept the overwhelming evidence on vaccination. Already we can dismiss his defence of impartiality. Yet so blatant and unethical is his present state of evidence denial a close look at parallels between defending antivaccination groups and his earlier work is warranted.

I do hope the University of Wollongong have a clear conscience.