Many of you will know of Meryl Dorey’s infamous claim that one didn’t die from whooping cough or measles thirty years ago.

Followed by, “and you’re not going to die from it today”. This was made on an episode of Sunday Night on the 7 Network in April 2009. Recently Ms. Dorey was queried about evidence for this. Rather boldly her response (in full below) included:

This statement was one of 3 or 4 sentences I was allowed in an interview that ran for over 3 1/2 hours and out of which, the TV station took what they could use against me and left out the rest.

Dorey had immediately prior contended that her mother intentionally placed her with other children so she would catch vaccine preventable diseases. “We were supposed to get them and we did and we were healthier for them”.

Actually there may be some truth to Dorey’s observation of no fatality from pertussis “thirty years ago”. The probable cause? Mass vaccination.

In January 2009 ABC’s The Pulse reported in A bad year for whooping cough:

Whooping cough used to be a disease that everyone got as kids, says Dr Frank Beard, acting senior director of Queensland Health’s Communicable Diseases Branch.

However, numbers plummeted following the introduction of mass vaccination in the 1950s. Cases fell to an all time low in the 1970s and 1980s…

Okay let’s check out the comment thread in question. 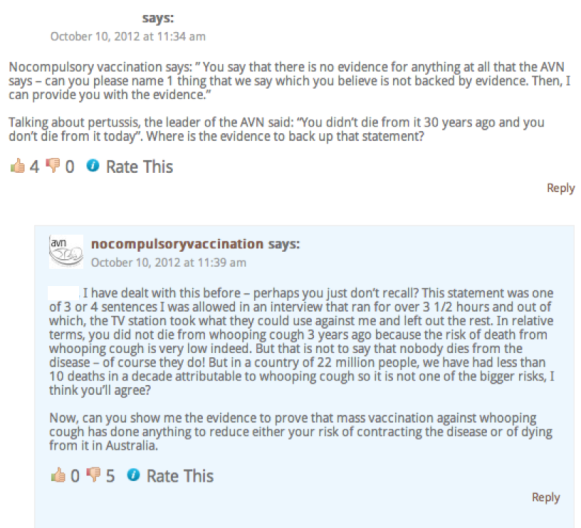 As it turns out I’ve already examined much of Ms. Dorey’s sleight of hand pertaining to pertussis this way.

In My personal request of Meryl Dorey, back in January I break down her method of using notification data out of context. I did ask for a response but found myself banned and blocked from social media. No emails were answered.

Okay, let’s use your method on another year.

We can see (using the same NNDSS data) that 2007 was the lowest year of infection on record since 1999 – http://i.imgur.com/XOrUY.png. It is also the 5th lowest year since records began.
Many discount the first recording years of 1991 and 1992 as very, very low anomalies that show a slowish start to new legislation requiring reporting of whooping cough. This would make 2007 the 3rd lowest ever. But I’m happy to take the 5th lowest year ever.

Rather different to your claim, no? But from your data source no less.

So, using your “technique” on merely another part of the same NNDSS table we can also claim vaccination more than halved pertussis notifications in a mere 6 years.

Your data, your method, the very same tables you quote from. Why then is this not your message? Why don’t you tell Aussies that these sources show a greater than 50% drop in whooping cough in just 6 years?

So, for the sake of this post Meryl has had that request for evidence of her claim about mass vaccination, long since shown to be the abuse of data that it is. Read the full breakdown for greater context.

Back to the comments. The poster chose to dig in and it seems seek an admission no evidence exists. The exchange is as follows.

Yes. I could ask the same Ms Dorey.

In fact along with the high diagnoses, fatalities are less than during the 1997 and 2002 outbreaks whilst hospitalisations are about the same. The alarming numbers of notifications reflect the sensitivity of PCR testing (now widely available) and the tendency of GPs to suspect pertussis.

However another question has come to mind. If the producers of Sunday Night in April 2009 edited footage they “could use against [Meryl]”, does this apply to her other comment? The one about pertussis being “nothing worse than a bad cough”. In her household it apparently lasted two weeks and was treated with homeopathy.

I wonder if this is down to those shifty producers also. Using material “against” Meryl Dorey.

Because clearly it is nonsense.

One thought on “Pertussis: nothing worse than a bad cough?”