Mainstream media won’t listen to or report the REAL news until they are forced to do so. THIS is the real news – and they are intentionally suppressing it.

A strident defender of Meryl, and an active critic of the notion Australian Vaccination-sceptics Network lends credence to conspiracy theories is Professor Brian Martin. Please note from here on I’ll refer to AVsN simply as AVN because in material I’ll source and at the time frame I’ll often refer to, the group was AVN Inc.

I guess Brian has a vested interest in setting up his approach to belief in conspiracy theories about as close as you can get to demanding evidence for a negative without actually saying so. That vested interest is his role as PhD supervisor of Judy – vaccines are a crime against humanity – Wilyman. In “preparing” for her PhD Wilyman has played many conspiracy cards from the paranoid to the dishonest. Little wonder Martin has argued for pointlessly high standards of confirmation before considering the AVN or Dorey entertain conspiracy theories.

I got interested in what I initially, and still, think is an unworthy issue for an academic around mid 2011. It struck me as a cheap shot to try to discredit the purpose of SAVN or defend the malignancy of the AVN over something so petty. Brian Martin summed up his viewpoint and level of evidence required on July 27th 2011 as part of an email exchange (emphasis mine):

Thanks for your emails. I think I understand where you’re coming from. You’ve provided what you think is good evidence for AVN members believing in various conspiracies. Let me state again my perspective on this. In “Debating vaccination” I noted that SAVN’s Facebook page had, as part of its basic information, the statement that “They [AVN] believe that vaccines are part of a global conspiracy to implant mind control chips into every man, woman and child and that the ‘illuminati’ plan a mass cull of humans.” I called this an “unsupported claim” because no good evidence for it was provided by SAVN or anyone else. It is, to my mind, a rather extraordinary claim, requiring persuasive evidence to be credible, for example a survey of AVN members. I consider the claim to be an attempt to discredit the AVN based on assertion rather than evidence. The claim was prominent on SAVN’s Facebook page, which is why I gave it such attention in my analysis.

There is a quite a bit of research on conspiracy theories. I believe it is accurate to say that many people believe in conspiracies of one sort or another. The obvious way to find out is to ask them, and that has been done often enough in survey research. To back up SAVN’s Facebook claim, it is not enough to show that some AVN members believe in this or that conspiracy – it’s necessary to show many or most believe in the mind-control-chip conspiracy, as stated.

Okay, so he has set the confirmation bar rather high. In fact out of reach. A survey of AVN members? Impossible for any cooperation. The “good evidence” I “think” I provided was in fact conspiracy references from AVN members, a screenshot of a post by Dorey on a video on mandatory vaccination and microchipping and part of this blurb from Dorey;

Injected Chips? To me, the scariest thing about the health smart card, is that it is only the beginning. The next and most logical step is the use of microchips which will contain all of the same information contained on smart cards but which will be injected into us and read and updated from a distance.

Now, before you start to think that this would never happen and that it’s all a bit too much like science fiction, be aware that as of January 1999, the NSW State Government has mandated that all domestic animals be injected with a microchip which would identify them. Pet owners don’t have a choice – they must do this by law or face fines. And how are these chips being put into the family dog or cat? Why, through their vaccines, of course. These microscopic chips are nothing more than contactless health smart cards. How long will it be before you or your child receive this “gift” from the government? They will sell it to us as a gift too. You will no longer have to worry about robbery because nobody will be carrying cash – this chip will contain your bank details so you can pass your hand over a reader and have the amount of your purchase automatically deducted from your account. Your child will never have to worry about getting lost because they will have an indelible identification mark which would have been inserted at birth. It’s all so exciting, don’t you think?

I won’t list all the references I sent to Brian Martin. He was defending Ms. Dorey’s management of, and honesty with free speech at the same time she was falsely claiming ownership of material to execute bogus DMCA take-downs of material on Scribd, actually owned by SAVN members. His erroneous claim that the AVN and Meryl Dorey were quite separate has been shown wrong many times. Reasonablehank touches on DMCA here, along with some seriously messed up AVN conspiracy leaning.

Suffice it to say I decided to take the statement Martin objected to, examine as much material confirming AVN members and Meryl Dorey’s belief in wild conspiracies and see how much of the statement could be supported this way. It turned out not much was needed. The offending comment Brian wanted evidence for:

They [AVN] believe that vaccines are part of a global conspiracy to implant mind control chips into every man, woman and child and that the ‘illuminati’ plan a mass cull of humans.

Could be stripped of one word and remain accurate:

They [AVN] believe that vaccines are part of a global conspiracy to implant control chips into every man, woman and child and that the ‘illuminati’ plan a mass cull of humans.

But yes, yes I know. Brian had already told us this. As he finished off in his email to me, it’s necessary to show many or most believe in the mind-control-chip conspiracy, as stated. So. No human culling? Perhaps he was in a hurry or something.

Do note however that Martin only refers to the mind control chip conspiracy and omits his initial concern with human culling. Again. It would seem if we were to apply the same standard of required evidence to Martin he appears to have intentionally drifted away from human culling.

Today Meryl Dorey has again confirmed her belief in this wild conspiracy of human culling through mass vaccination. 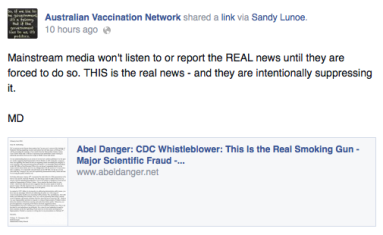 Following the link we find at one of the worst of the worst conspiracy madness sites, this delight (scroll down to CDC busted for burying vaccine related autism link);

A visit to this site Dorey refers to as “REAL news” reveals ample conspiracy – including the “Hear This Well – Vaccines Do Cause Autism” YouTube rubbish. Nonetheless what Dorey is believing here is clear.

As an academic who writes extensively on dissent one would expect Professor Brian Martin to address this in depth. Arguing that AVN is not Dorey or a few AVN members are not “the AVN” just does not cut it with this mob. Any AVN members who were not Dorey clones were banned and the content deleted. Martin would argue in the absence of Dorey plainly stating – perhaps via interpretive dance – that she believes every word there is still nothing conclusive. Technically he would be right. But actually he would be wrong. It is clear he has failed to defend his claim that Dorey has no love for this depth of nonsense.