Long term anti-vaccine lobbyist, Judy Wilyman recently had one of her standard attacks on HPV vaccination republished on the site of the ambitiously named The New Zealand Journal of Natural Medicine.

The same page on which Wilyman’s piece appears has a link to the New Zealand 3D Investigative TV3 report on the types of injuries and even deaths Wilyman contends are firmly associated with the HPV vaccine Gardasil. The programme, entitled Cause or Coincidence? aired on November 9th 2015.

The Immunisation Advisory Centre based at The University of Auckland have responded directly to claims raised in the programme. Three NZ girls have become ill and two girls have died after receiving the HPV immunisation. The IAC provided a comprehensive response, which included:

There is absolutely no evidence that the Gardasil® vaccine has caused death, complex regional pain syndrome (CRPS), postural orthostatic tachycardia syndrome (POTS), or any other related fatigue syndromes.

Just because these conditions occurred after vaccination it does not mean that they were caused by the vaccine.

It was also stated in the programme that fatalities of this nature and illnesses of this type are occurring at rates that they would had their been no HPV immunisation programme.

In no way can The New Zealand Journal of Natural Medicine be called a “journal”. It constantly hits the peak of the very worst deceptions peddled by paranoid pushers of alternatives to medicine. Certainly there are advertisements for a cornucopia of unproven concoctions promising to improve or cure a host of mild to moderate ailments. Yet articles seem to follow a pseudo-binary opposite theme. A browse through some available samples is most revealing.

If something is in the realm of science based medicine it is not just useless, but harmful. Not only is this publication in the style of Natural News, but it heavily republishes articles from Adams’ anti-science hysteria website. A typical example is, Why won’t Big Pharma ever cure cancer? Because “the cancer industry is probably the most prosperous industry in the United States”. Exactly why “Big Pharma” should bear this manufactured blame when cancer research continues apace in various research institutions isn’t made clear. Readers are supposed to swallow the tired line that profit from treating cancer is what ensures the “cure” never surfaces.

Readers are of course not alerted to the advances cancer research has delivered, leading to full remission in cases where this was once unheard of. Or treatments that have improved both the quality and duration of life for patients across a range of cancers. Gerson cancer treatment gets a plug. Vitamins C,D,E, Chinese herbs, Ayurvedic herbs, selenium, turmeric and high protein diets which increase the immune system’s ability to kill cancer cells also feature. Homeopathy improves quality of life for cancer patients, and is in fact “extremely helpful” at doing so.

This is just a snippet of cancer treatments. Of course, you must be wondering why we have never heard of this. Simple.

You see “the early Rockefellers” thought up the “business plan of our current medical system”, and “gained control” of most medical schools in the early 20th century.

The plan was to create all sorts of diseases, say with vaccines (e.g. autism, cancer, etc), fluoride, pesticides, junk “food” and the like, and then invent drugs to manage said diseases for the life of the patient, all the while getting gobs of taxpayers’ hard earned dollars to pay for said drugs and management.

Never, ever, ever actually CURE any disease, as that would not be profitable, but get ever increasing increments of cash to “manage the disease” and continually “LOOK FOR” the cure.

Most if not all of which societies are linked to the very same corporations that helped create the diseases in the first place, e.g. cancer societies being funded by pesticide manufacturers.

Call your brand of medicine “scientific” and “evidence-based” while disparaging anything that comes from beyond the pale as “unproven” or worse, “anecdotal”.

When someone comes along with an actual cure, disparage them, ensure their funding gets revoked (if by some miracle it happened in the first place), and in extremis have them imprisoned or murdered.

However, millions of people are now waking up, albeit more slowly that one would hope, although it’s sometimes amazing that there are people “out there” who are still thinking for themselves at all.

And, as long as it lasts, the Internet is at your service, where everyone can do their homework.

Oh, my. Murdering those who have an “actual cure”. Ongoing perusal of this esteemed “journal” reveals a Natural News piece informing us that certain medications causally increase our potential to murder up to 200% in the case of anti-inflammatory painkillers. Opioid painkillers “increase the risk by 92%”. Antidepressants – 31%. Tranquilizers – 45%.

The Finnish study, published in June this year in World Psychiatry deals with association between the medications and murder. Yet the study is misrepresented by Natural News/NZ Journal of Natural Medicine under the heading Certain Medications cause people to commit murder…

This has a sub-heading Homicide risk increased by 31% to 200%… 100 million Americans take these drugs. It goes on to claim that the study:

…found that several classes of prescription medications – including antidepressant drugs, tranquilizers and anti-inflammatory painkillers markedly increased the chances of someone murdering another human being.

Which, like the sub-heading, is highly misleading because the study concludes (bold mine):

These results – which may probably be generalized to other developed and stable societies that have a low to medium homicide rate, although not necessarily to countries with higher rates of organized and premeditated crime – imply that the use of antidepressants should not be denied to either adults or adolescents due to a presumed risk of homicidal behavior. The surprisingly high risk associated with opioid and non-opioid analgesics deserves further attention in the treatment of pain among individuals with criminal history.

It can’t be ignored that the study itself notes “non-scientific” organisations blame psychotropic medications, especially antidepressants for large scale shootings in the USA, citing the Citizens Commission on Human Rights of Colorado: a front shop for Scientology’s anti-psychiatry propaganda and lobbying. A 2011 issue of the NZ publication asks on its cover, “Is Psychiatry A Hoax?”

The NZ Journal of Natural Medicine targets a number of areas where conspiracy meets evidence based medicine. Fluoride and how to detox from it, is accompanied in various issues with all the pseudoscientific horrors that are caused by this “poison”.

Predictably since the proposed Australian No Jab No Pay legislation gained increasing media coverage over 2015, this was picked up in NZ. The image below is from Issue 17, May – August 2015. 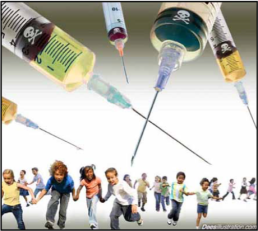 The article following this the incredible “Forced Vaccination At Gunpoint”. This is the same article word for word at Natural News, published November 19 2007 by Mike – Health Danger – Adams. Yep. By the time the NZ Natural Medicine “journal” published it it was 7, 1/2 years old. This image was added: 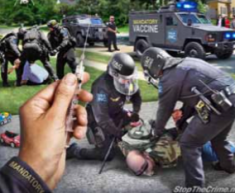 Broaching the topic of No Jab No Pay in Australia comes The War Against Vaccine Refusers, written by an editor:

Make no mistake, there is a war hotting up against people, who for want of a better name I will call “vaccine-refusers” – people who choose not to be vaccinated (or allow their children to be vaccinated) or people who may agree to one or more vaccinations but don’t want to have every new vaccine that Big Pharma brings to market injected into them or their children.

In Australia, Prime Minister Tony Abbott recent announcement that the government planned to remove the “conscientious objection” category from vaccination exemptions from January 1, 2016 is especially worrying. Families who do not vaccinate their children (who do not belong to the Church of Christ, Scientist, and/or cannot obtain a medical exemption from vaccination) would lose their eligibility to the “Child Care Benefit and Child Care Rebate and the Family Tax Benefit Part A end of year supplement)”. The loss of these benefits could cost a family approximately $15,000 per child.

If the pro-vaccine lobby is successful in inculcating in the general public the belief that people do not want to be vaccinated (or parents who choose not to vaccinate their children) are “irresponsible” or “free- loaders”, the social conditions in which a coercive or even compulsory vaccination policy can be instituted will have been created.

If you take into account all the recent news from the USA (including the forced vaccination of children detailed elsewhere in this issue), the many bills before different US State governments, and the announcement by the Australian PM and the recent promotion of compulsory vaccination by Dr. O’Sullivan in NZ, it becomes clear that Big Pharma and its minions are obviously unhappy that there may be anyone refusing to be vaccinated – even if vaccine-refusers are only a small percentage of the population.

In fact as we know members of the Church of Christ, Scientist were not required to abuse their children by denying them the protection of vaccine induced immunity. Only medical exemptions are valid reasons to not lose access to benefits.

I can’t possibly comprehend why Judy Wilyman would want her name associated with a magazine populated with such varied deception and conspiracy. There is one small piece in this same issue some of you may have read before. There is very little original – or up to date – material in this so-called “journal”. As such they have chosen to publish the utterly insane, amusing as it is offensive piece from the Journal of Public health and Epidemiology, 2014; 6: 271-86.

This has been republished across the Internet, even starring in What Doctors Don’t Tell You. So I’ll publish it in full below:

The explosion in autism has been caused by the introduction of human fetal cell lines in the manufacture of MMR (measles-mumps-rubella) vaccines, a major new study has concluded.

Before 1987, when the vaccines were produced with animal cell lines, autism cases were relatively low. Today, it’s been estimated that 1 in 50 children has autism.

Stem cell researcher Theresa Deisher and others say that the correlation between the sudden explosion in autism cases and the introduction of the new MMR vaccines is too strong to ignore – although, as the old maxim goes, correlation doesn’t prove causation.

The ‘change point’ – when the numbers of autism cases rose sharply – happened in the UK in 1987, just when the new MMR vaccine, using human fetal cells, was introduced. A similar correlation was seen around the same time in Denmark, while the autism change point in the US was 1980 to 1981 after the introduction of the new MeruvaxII and MMRII vaccines in 1979. Both vaccines used human fetal cells [as a culture medium for the rubella viruses in the vaccine – Ed] for the first time.

WI-38 and MRC-5 human diploid cell lines are used in the production of hepatitis A, rabies, rubella, varicella and Pentacell DTaP-IPV/Hib as well as MMR.

The article Vaccines Contain No Aborted Fetal Cells looks at the bogus claims of fetal cells in vaccines.

One thought on “The madness of the anti-medicine movement”