Andrew Arnold, the Melbourne based chiropractor whose manipulation of the spine of a two week old infant was described as “deeply disturbing” by the Victorian health minister is presently refraining from treating anyone under 12 years of age.

The ABC reported just over a week ago that health minister Jenny Mikakos also said in part;

It’s appalling that young children and infants are being exposed to potential harm. That’s why I’ve written to the Chiropractic Board of Australia and AHPRA (the Australian Health Practitioner Regulation Agency) to urge them to take the necessary action. There is nothing at the moment that prevents chiropractors from undertaking these risky practices… The advice that I’ve received is that the risk of undertaking spinal manipulation on small infants far outweighs any perceived benefit.

It’s worth noting that chiropractic treatment in general and the manipulation of infants specifically has a history of drawing harsh criticism from health and medical professionals and penalties from regulators. Fairfax reported in December 2011, Doctors take aim at chiropractors. One wonders at the lack of a cogent response to such serious statements from reputable professionals.

The inclusion of a chiropractic course at Central Queensland University prompted 34 scientists, professors and doctors to note federal government funding “gave their ‘pseudoscience’ credibility”. Fairfax reported that their statement included;

…it was also disturbing that some chiropractors spruiked the adjustment of children’s spines for many potentially serious conditions including fever, colic, allergies, asthma, hearing loss and learning disorders.

…the doctors said they were also concerned about chiropractors being the largest ”professional” group in the anti-vaccination network. [Now named The Australian Vaccination Risks Network]

At the time Australian Chiropractors Association president Lawrence Tassell responded by saying the criticism was ridiculous and misinformed. He further contended chiropractic was “evidence-based, including its use on children for the treatment of conditions such as colic.”

Just colic? Was this an admission that fever, asthma, hearing loss, all allergies and all learning disorders did not benefit from chiropractic despite promotional claims that they did? Even so the question of evidence supporting chiropractic for the treatment of colic (crying♣) was not as Tassell suggested. Months later a Cochrane review consulted research into that very issue.

The studies included in this meta-analysis were generally small and methodologically prone to bias, which makes it impossible to arrive at a definitive conclusion about the effectiveness of manipulative therapies for infantile colic.

…most studies had a high risk of performance bias due to the fact that the assessors (parents) were not blind to who had received the intervention. When combining only those trials with a low risk of such performance bias, the results did not reach statistical significance.

In May 2011 Chiropractic and Manual Therapies published Reggars’ wonderfully honest and revealing article, Chiropractic at the crossroads or are we just going around in circles? Reggars is a firm proponent of evidence based therapy. As such he criticises the vertebral subluxation complex and B.J. Palmer’s notion of “dis-ease”. Consider this gem of a paragraph;

The irony of this fervent belief in the VSC and chiropractic philosophy is that its development was not founded on vitalistic theory but rather as a legal strategy, conjured up by an attorney, in the defence of a chiropractor charged with practicing medicine [7, 32, 33]: “Many in chiropractic never learned the origin of the pseudo-religion or chiropractic philosophy. It was nothing more than a legal tactic used in the Morriubo’s case.”[34], and “B.J. Palmer probably developed his dis–ease theory as a result of the winning strategy used by his attorney Thomas Morris to defend Japanese chiropractor Shegatoro Morijubo in Wisconsin in 1907″[35].

Reggars also concluded that the Chiropractic Association of Australia (CAA) abandoned science for fundamentalist ideologies. He observed that their “all-encompassing alternative system of healthcare is both misguided and irrational”.

Readers are handed the reality of what chiropractors genuinely offer;

Chiropractic trade publications and so-called educational seminar promotion material often abound with advertisements of how practitioners can effectively sell the VSC to an ignorant public. Phrases such as “double your income”, “attract new patients” and “keep your patients longer in care”, are common enticements for chiropractors to attend technique and practice management seminars.

Selling such concepts as lifetime chiropractic care, the use contracts of care, the misuse of diagnostic equipment such as thermography and surface electromyography and the x-raying of every new patient, all contribute to our poor reputation, public distrust and official complaints. […]

And;
For the true believer, the naive practitioner or undergraduate chiropractic student who accepts in good faith the propaganda and pseudoscience peddled by the VSC teachers, mentors and professional organisations, the result is the same, a sense of belonging and an unshakable and unwavering faith in their ideology.

Back in June 2016 Ian Rossborough published a similar video which also drew strong condemnation. The Australian Health Practitioner Regulation Agency (AHPRA) responded by banning him from manipulating the spines of children under six.

It is difficult to watch Andrew Arnold “manipulate” an infant. Yes a baby is distressed and crying. But it’s the manipulation of the parents I also find appalling.

Grabbing the infant’s feet he announces “I’m locking in here”. Really? He lifts the baby offering verbal distractions. “I’m just gunna go upside down for a second… yep and as we go back down just hold his head… Perfect!” Then comes the stick-that-goes-click. Or as chiropractors call it, the Activator. A spring loaded device which delivers an “impulse”. He demonstrates the lowest setting and releases it into what seems to be the right side of the infants cervical spine. Another still image (below) shows Arnold apparently applying the activator to the infants upper cervical spine at the base of the skull. 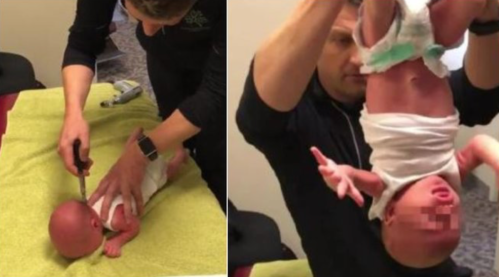 The application of the activator as seen in the video hurts or distresses the infant immediately and he begins to cry. “…and he’s going to squawk a bit”, Arnold offers as if he planned and expected this all along. Then, he does it again! And guess what? More crying. “Sorry mate” he offers for the parent’s sake. He checks the collar bones “…cause they get a bit crunched up inside”. He checks potential for collar bone crunching by moving the infants hand. “So with this, start to get in the habit of getting a grip here”, and the video finishes with what appears to be reference to the Palmer grasp aka Darwinian reflex.

This reflex in which babies grip fingers develops around three months of age. I do hope Andrew Arnold informed the parents of this. Then again, I hope someone informed Andrew Arnold of this.

There’s little doubt we’re slow to not merely evaluate most chiropractic therapy and indeed most chiropractors as offering nothing more than pseudoscience. That so people many in developed nations believe their demonstrably preposterous claims about treatment is quite surprising. With the amount of pseudoscience and junk medicine accessible online it is little wonder parents will fall for chiropractic claims about treating infants.

Chiropractic clients should be informed that mild to moderate adverse effects are frequently associated with manipulation of the upper spine in adults. Dissection of the vertebral artery and stroke may also occur. [Source]. It’s difficult to imagine more than a very few parents would be comfortable having infants, babies and young children treated if aware of this situation.

A 2008 study found there was very little supporting evidence for the claims chiropractors made regarding pediatric treatment. A 2007 systematic review found that serious adverse effects may be associated with pediatric spinal manipulation. However observation data could not support conclusions on incidence or causation.

It remains firmly demonstrable that evidence to sustain even a fraction of claims made by chiropractors as to how effective pediatric treatment is remains absent. The fact chiropractors themselves have not pursued large scale randomised controlled trials with a vigor akin to that with which they claim an ability to heal is concerning.

I have no doubt there are chiropractors who do strive to follow an evidence based approach to treatment. Yet with some influential chiropractors labelling this approach as out of date in favour of the approach of D.D. Palmer’s 19th century vitalism, they face a struggle to be heard.

As John Reggars noted since the adoption of the fundamentalist approach and application of the vertebral subluxation complex (VSC), chiropractic in Australia has taken a backward step. Chiropractors have abandoned a “scientific and evidence based approach to practice for one founded on ideological dogma”.

Australians are entitled to be protected from expensive, dangerous pseudoscience in the health industry. At present we are faced with regulators who need to develop some rather sharp teeth and make a meal of chiropractic pseudoscience.

♣ (4/3/19) NB: Colic may refer to severe abdominal pain caused by an intestinal blockage or gas. Infants are prone to the condition, responding with constant crying. In fact crying is the means by which “colicky” babies are diagnosed. Paediatricians may use the “rule of threes” in diagnosis, particularly items 2-4.

Because crying is what determines infantile colic there is ample disagreement as to the role of intestinal pain or even if colic itself is a myth. Other criticisms involve the convenient use of colic as a diagnosis for excessive crying. 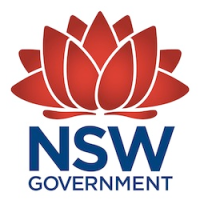