An excellent review of the preventative impact on liver cancer provided by the full sequence of the Hepatitis B vaccine schedule. Includes a thorough deconstruction of the disinformation frequently pushed by Australia’s Anti-Vaccination Network that the vaccine is ineffective in this regard or (no surprise) is the “cause” of increasing hepatitis B infection.

…however just last night Dorey posted the following comment on the AVN page:

The chart cited below;

Right now I’m going to focus on the claim of increasing liver cancer rates thanks to Hep B vaccination.

One of the commentors over on the Australian Anti-Vaccination Network’s facebook page challenged the group’s president – Meryl Dorey – to comment on a hypothetical scenario as a way of discussing the utility of vaccination against Hepatitis B (Hep B). A conversation ensued and commentor’s question was never answered, however just last night Dorey posted the following comment on the AVN page:

…with this chart of liver cancer incidence in the United Kingdom:

Right now I’m going to focus on the claim of increasing liver cancer rates thanks to Hep B vaccination.

But first the rationale behind using the Hep B vaccine to prevent liver cancer:

The vaccination effort against Hepatitis B, especially to protect newborns, will not stop

Australians are unfamiliar with the impact of large scale infection from Hepatitis B virus [HBV].

Ways of controlling the spread of infection include vaccination of health care workers against HBV, that infection with HBV is a notifiable disease, the quarantine of patients suspected of having HBV, ongoing quarantine procedures for patients diagnosed with HBV, extensive education and follow up of patients upon discharge and Harm Reduction initiatives.

So successful have these measures been that many Aussies erroneously believe HBV is exclusively a problem for high risk demographics such as IV drug users or sex workers. This misconception itself is as dangerous as high risk behaviour because it leads to the belief that protection from infection is linked to how one identifies oneself.

Indeed, IV drug users and sex workers are often highly educated about the risk of HBV infection and implement safe injecting and safe sex practices. Many seek out or are offered the HBV vaccine by their own or any GP. The fact is everyone is susceptible to infection with HBV or any blood borne virus.

Tragically the antivaccination lobby has done much to mislead some Aussies into what could almost be termed lethal complacency. By both dehumanising high risk demographics and falsely linking the HBV vaccine to injury and death, they have propagated ignorance and fear, condemning many to premature death from liver failure. In some cases the virus will be cleared over time, but there is no way to manufacture this outcome.

HBV positive individuals who would not exist but for antivaccination propaganda, can transmit the virus for many years post infection, completely free of symptoms.

HBV may be the cause of up to 80% of all cases of hepatocellular carcinoma (liver cancer) worldwide, second only to tobacco among known human carcinogens. […]

One should not judge by appearance: most infected people look perfectly healthy and have no symptoms of disease, yet may be highly infectious.

As Australia’s population changes rapidly through immigration and we travel more readily our risk of HBV infection steadily increases. At no time in our history has vaccination against HBV been more important. This will be true tomorrow, next week, next year and next decade. For this reason HBV vaccination is available to newborns.

It’s safe to say that everyday in Australia new lives not only begin, but are in many cases saved and protected from infection through this initiative. In the USA at least eight people per day die from HBV related complications. 25% of carriers world wide – over one million people – die each year from chronic hepatic insufficiency, cirrhosis and liver cancer brought on by HBV infection.

The protective effect of vaccination rolls on for newborns, toddlers and children. Children not born to a HBV positive mother are still protected from the many modes of infection as they grow and go about their lives. There are more concerns than sexual behaviour or the sterility of drug administration. Blood borne is invisible. Only a tiny scratch or cut to the skin or oral mucosa is enough to allow the HBV virus to infect.

It can remain viable for up to a week in blood stains on razor blades, nail clippers, nail files, table tops and can be transferred to a tiny wound by moistening dried, viable blood stains on bedding. We can extrapolate from that to see potential risk comes from any sharp surface or object or textile that children play with and chew on.

It would appear that if complacency was to be justified it is in the parents whose children are vaccinated at birth.

Fortunately antivaccination lobbying and planned fear mongering is not the global norm. At the same time we can celebrate the truly life changing roll out of Hepatitis B vaccination in China.

In 2004 The Association for Asia Research reported 690 million people in China were infected with HBV:

According to the Xinhua News Agency, April 25 is Children’s Immunization Day in China. China’s health department has named this day with the theme of “vaccination prevents hepatitis B” this year. They want to draw the public’s attention to the importance of vaccinating children for hepatitis B vaccination to stop further spread of the disease in China.

A recent study showed that about 2 billion people in the world are infected with hepatitis B; 690 million of them live in China. The chronic hepatitis B carriers in China number about 20 million. An average of 280,000 deaths annually are caused by hepatitis B and related liver diseases.

Still today in China HBV infection carries stigma much like HIV which, in what should be a wake up to Australian and USA antivaccination mobs, prevents middle and upper class individuals from seeking blood tests. Despite HIV awareness being much greater, as recently as 2007 the HIV to HBV infection ratio in China was 1 to 200.

In 2005 the GAVI Alliance began to work with Chinese officials in combating HBV through the vaccination of newborns. GAVI had already made significant inroads in developing nations. In 2004, 22 years after HBV vaccination was introduced to Italy, 50% of low income nations had included the vaccine in immunisation schedules.

What’s truly impressive about GAVI’s impact, is that this was only six years after the 50% mark was reached for high income countries. Over 75% of that catch up followed the launch of GAVI. 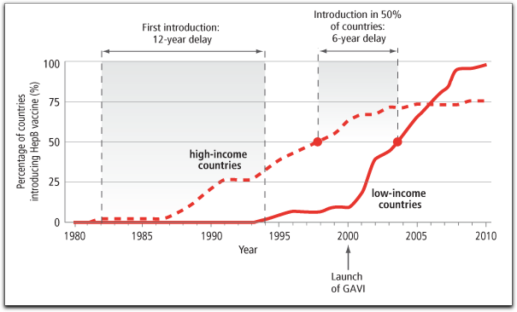 In 2001 10% of China’s population were chronic carriers of HBV, which was responsible for hundreds of thousands of deaths from cirrhosis and liver cancer annually. In 2004 this was estimated to be 280,000 deaths. Less than 40% of children in poor areas were being immunised.

In 2002 the Chinese Centre for Disease Control, the Chinese Government and GAVI formed a partnership to co-fund HBV vaccines. This lasted until the end of 2010 and produced a concerted effort to fight infection. Over 25 million newborns in remote and poor regions of western and central China were given free HBV vaccines.

As many women traditionally gave birth at home, raising awareness as to the value of immunisation and encouraging mothers to give birth in hospital became a crucial part of the programme.

In 2005 the Chinese government added HBV vaccines to the national immunisation schedule. At the beginning of the project 64% of children were immunised with the first dose at birth. Now this level is over 90% in the majority of these remote regions. Today, less than 1% of children aged under 5 are carriers of HBV.

The success of the introduction of hepatitis B vaccine is a model, showing us what we need to do and what can happen as we embark on efforts to introduce important new vaccines against pneumonia, diarrhoea and cervical cancer.

China remains a country where vaccines are not a victim of their success. 25 million newborns have been given a start in life that many of their parents could only dream of. Australia’s most vocal antivaccination identity claims Chinese herbal medicine has been shown “to clear Hep B from the system… there are peer reviewed studies on this”.

It appears the Chinese themselves would, and can, disagree without saying a word. There is no cure. The virus can and does clear of it’s own accord in some cases, which might easily be the subject of poorly controlled studies.

However the ravages of Hepatitis B infection in China is a matter of recorded history. I wish them all the best for the future.

Because after all as we can see yet again, vaccination saves lives.