The Sixty Minutes story on the benefits of vaccines was a conspiracy. Because NineMSN is “a joint venture between Microsoft (yes, Bill Gates – and we know what he thinks about vaccines – they are ‘magic’ according to his latest interview) and PBL whose chairman, James Packer, sits on the board of major vaccine and drug maker, Glaxo Smithkline. Do you REALLY think that a station with their hands in that much dirty money would even THINK about doing a fair story on this issue?” says Meryl Dorey, President of The Australian (anti) Vaccination Network.

Nothing sets off a conspiracy minded anti-vaccination lobbyist like facts.

Below this text is a Sixty Minutes Australia segment, Getting The Point, that aired June 12th 2011. The only irrationality comes from micro-palaeontologist, Viera Scheibner. She is marketed as one of the world’s foremost experts on vaccines, is “sought after as a speaker and expert witness” and worshipped by fellow Bent Spoon winner Meryl Dorey. Scheibner’s claim of being an expert witness and other outright lies are dealt with here splendidly.

“…I am not satisfied that her formal qualifications and professional experience properly equip her to provide a valid professional opinion on the complex subject of immunology…” and
“…one must question her capacity to properly evaluate and interpret the results of others’ scientific experience. I am not prepared therefore to accept her evidence in preference to that of…
– Human Rights and Equal Opportunity Commission
[….]
“I draw attention [to] misleading information provided by Dr Viera Scheibner … who continuously writes against immunisation. In the 9 March edition of the Medical Observer, she submitted a very unusual letter [which] makes claims that are not supported by the documentation she referred to. It is very important for people to realise that the information provided by Dr Scheibner is not accurate.” – NSW Legislative Council

Whilst exploiting white coat syndrome through use of her PhD title of “Doctor” to mislead those seeking advice, Viera defends her lack of qualifications. Sixty Minutes found that she has “a doctorate in the natural sciences”, and “some nursing qualifications”. And whilst all autism cases are caused by vaccines, the absurdity of this claim is dismissed because Viera knows more than any doctor. There is nothing good to be said about vaccines, and immunity is gained best by contracting the disease.

In March 2004 there was some activity in the BMJ defending the scam of one no-longer-a-doctor, Andrew Wakefield. We now know his work was fraudulent. Quite ironic because defence of Wakefield and attacks on Brian Deer, were often themed on the bias of the dastardly pro-vaccine industry publication, the BMJ. Which incidentally allowed Scheibner [Principle Research Scientist (Retired)] to publish a letter that gives one ample insight;

Orthodox medicine is toxic and harmful. It seems accepted that all medications have side (undesirable) effects. However, this is only relevant to orthodox medications. Correctly administered, homoeopathic remedies and natural remedies have no side effects. One has to elaborate here that there could be uncomfortable feelings after homoeopathics but they are desirable effects. Elevated temperature, rashes and vomiting are signs of detoxification and of a desired change of a chronic condition into an acute illness leading to healing.

Which to the lay person means homeopathy does not work. The disease of, say, measles will run it’s course and fevers (convulsions for 1 in 200), rashes, high temperature are symptoms of the infection you will endure until it passes. If you are unfortunate enough to be one of the one in 5,000 who die, sustain encephalitis or one in 8,000 who contract Subacute Sclerosing Panencepahltiis you will not recover. She continues…

Orthodox medicine with its pharmaceutical industry has become a huge money spinner and as such has become vulnerable to political interference. Vaccination is the best example. To make a lot of money, vaccinators want to vaccinate every child. The more children are vaccinated, the more obvious are the serious side (undesirable) effects including brain damage and death. Politically motivated medicine denies or plays down undesirable effects. The word “obvious” has been banished even though it is considered prudent medical practice that when a medication or a procedure is administered and symptoms appear afterwards, then that medication and/or procedure must be considered as the cause of the observed symptoms…..

This rubbish goes on, ultimately ending with a bald faced lie: “No Competing Interests”. But Scheibner’s skeptarded hoop jumping can be easily matched by her Bent Spoon Award winning pal, Meryl Dorey. The Australian Vaccination Network Facebook page – aka The Twilight Zone – lit up with outrage at the intrusion of evidence. The first “response” was from Meryl Dorey herself and bulging with lies. Meryl was advised not to appear. She didn’t choose not to. Presently in the Supreme Court fighting the NSW Health Care Complaints Commission it was a no brainer.

But worse is her claim that a.) she offered them the names of reputable doctors and b.) that reporters actually contacted her to make excuses for not interviewing them. Then follows the ranting about Bill Gates and James Packer, who “… don’t care about your children or my children. They don’t care if they live or die. So long as they can make money doing what they are doing and protect their financial interests in the meantime…”. 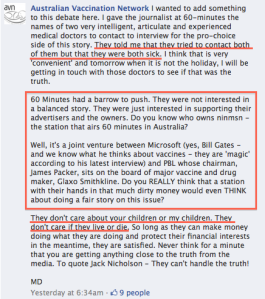 Other comments included, “What a crap biased report, no surprise. Immunization rates must need a boost.” “Pathetic piece of reporting. One can only hope that people see it for what it was.” “Why weren’t the parents of Ashley Epapara and Saba Button interviewed? For the exact reason that MD mentions above. Not good for business.” “Isn’t this a live vaccine … can’t the reporter pass on the virus to the baby if she just had her booster shot???” “When will reporters actually read Dr Andrew Wakefield‘s study and report on it accurately? Are they incompetent reporters who don’t check their facts, or are they outright liars? And if they are incompetent reporters, how to they get to be on a prime time program like 60 minutes? Ugh. So glad you didn’t lower yourself Meryl Dorey. Disgusting and irresponsible reporting by 60 minutes.”

And on it goes with feverish “liking” of each twilight zone observation.