According to conspiracy theorist and anti-vaccine lobbyist Judy Wilyman, it is a “scientific fact” that “the chemicals” in vaccines and vaccines themselves have “synergistic, cumulative and latent effects”.

Most of us are familiar with the latent effect/s of vaccines. Prevention of disease and death spring to mind. Combined? Prevention of multiple diseases, passing them on to tiny babies or those who cannot be vaccinated. Yet Judy is pushing a barrow of malignancy. Cumulative effects are the cause of many ills, Judy claims. With vaccines widely used for 80 years, her evidence then, must be compelling. She states:

There is no measure of delayed responses of vaccines or long term health studies of children monitoring the combined effects of vaccines. That’s the hard evidence that we would need to say this programme is safe


Wilyman claims diseases were reduced before vaccination and health department records show a rarity of adverse reactions. But of course, “often this link is denied”. Her evidence then, must be compelling. Nah – just kidding.

I previously wrote a little on the W.A. Woo Fest that Professor Fiona Stanley described as “bizarre” and ”so misinformed that it is scary”. I stuck to question one of the two that Judy reckons define “the context and the ethics” of immunisation programmes.

No doubt the ghastly constituents of vaccines will be equally misrepresented. “This generation of children is the unhealthiest yet”, Judy intones failing to offer a definition of chronic illness or any insight into the massive leaps in diagnostic technology and paediatric medicine.

Obesity is a major chronic health problem in today’s children and it alone ushers in many more complications. Poor diet and restricted activity have a permanent effect upon the development of the endocrine system, in turn effecting fat and sugar metabolism. Unsurprisingly diabetes is more common.

Prolonged periods of sitting (including recreational choices) can lead to problems from chronic constipation to poor perfusion and oxygenation of peripheral tissues to the rare but steadily increasing incidence of childhood thromboses. Increases in long distance travel have brought an awareness of the importance of regular leg movement in adults. There is a delicate balance between haemodynamic pressure, lymphatic function and venous flow related to movement. Vaccination is not to blame.

Judy would have fun explaining why Vaccine Preventable Diseases make the list of childhood diseases on the increase in developed nations, following reduction in immunisation. Or the success of the Hib vaccine in controlling that disease in just 12 years. Rotavirus is not linked to intestinal problems in infants. Despite telling her audience in W.A. that the influenza vaccine may be more dangerous than influenza itself, last September 115 deaths from ‘flu were reported in the USA. Wilyman:

In epidemics where there is only a small risks to individuals from the disease then the risk of the vaccine may be greater. Particularly if multiple vaccines are being used – and this is the case with influenza. Influenza is not a serious risk for the majority of children

Judy goes on to misrepresent thimerosal and other preservatives (formaldehyde) “which are known to cause neurological and immunological diseases”. Thimerosal is in only two childhood vaccines. Bemoaning formaldehyde exposure is as outrageous as it is ridiculous. A backyard BBQ burning old wood off-cuts or timber fixtures would produce many thousands of times that of a lifetime of vaccination. It’s typical misrepresentation of how much dose makes a poison.

Antibiotics which “we know are linked with allergies and anaphylaxis” are other terrible ingredients. The same with aluminium which is also “linked to auto-immune diseases”. Judy omits telling the audience that breast feeding over a 6 month period exposes an infant to 2.5 times the amount of Al from vaccination. Formula delivers 10 times the amount whilst Soy formula introduces 40 times the amount of aluminium.

Exactly how an infant can deal with ingesting 40 times the aluminium as via vaccination over the same period without being poisoned, is of no moment to antivaccine lobbyists. Presumably they imagine the hanky panky “natural” approach via digestion is a fail safe. Yet ingested Al certainly makes it to the blood stream and is excreted the same way as any source of Al – the third most abundant element and most abundant metal in nature. We excrete all but 1% that we’re exposed to over a lifetime.

Judy goes on to link “autoimmune diseases” such as diabetes, autism, arthritis, M.S., lupus and thyroidism to pathogens in vaccines. You see, the hanky panky digestion caper means pathogen proteins would naturally enter the stomach as amino acids. But injected these whole proteins produce auto-antibodies and cause autoimmune disease.

In case you missed it Judy has seemingly discovered that autism is an autoimmune disease, whilst the rest of the world’s researchers claim it has no known etiology. Which is also at odds to Dorey’s claim of acute demyelinating encephalomyelitis and other instances of encephalitis being the cause. Their unique impact is graphed below. 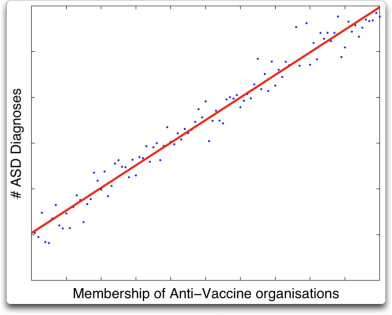 Judy also blames allergies and anaphylaxis on vaccination. Yet incidence of anaphylaxis is documented at 0.65 cases per million vaccinations. Larger studies have also found less than one case per million vaccines and no deaths attributed to the immunizing agent. However 500 cases per one million are attributed to eggs, tree nuts, cows milk, wheat, soybean, fish, shell fish, sesame, peanuts, latex, insect stings and anesthesia.

Allergies are also blamed on vaccines by Judy, despite greater intensity, duration and frequency already being linked to climate change. In fact everything is blamed on vaccines – even speech delay regardless of diagnostic criteria changing markedly in recent years. Other developmental delays include ADHD. Despite very few viable candidates for asthma, but many well known triggers that’s also squeezed into her discovery portfolio. All down to vaccine ingredients that parents are not warned about, according to Judy Wilyman.

Wilyman loves to quote government sources when it suits her but omits that The Australian Immunisation Handbook notes:

Research has constantly replicated no link in the following:

Being “an independent researcher” and fond of her “PhD researcher” title Judy would be aware of the Global Advisory Committee on Vaccine Safety’s position on Hepatitis B vaccination and Multiple Sclerosis:

It would seem Judy consciously rejects accepted material for that which is clearly baseless. Despite this mad scramble to blame almost every childhood ailment on vaccination, Wilyman has forgotten her hypocritical quote above. “Coincidence is not science”. In an evidence vacuum, her “synergistic, cumulative and latent effects” simply do not exist.

Despite the coincidences and claimed conspiracies, Judy Wilyman is yet to produce the science.