Paranoia is an unfounded or exaggerated distrust of others, sometimes reaching delusional proportions. Paranoid individuals constantly suspect the motives of those around them, and believe that certain individuals, or people in general, are “out to get them.”
Persecutory Delusion:
A fixed, false, and inflexible belief that others are engaging in a plot or plan to harm an individual.

Defamation is a tort, or a civil wrong, which occurs when defamatory material relating to an individual is published.  Material will be defamatory if it could:

For a defamation action to be successful, three elements must be satisfied:

Some readers may remember the recent AVN post by president Meryl Wynn Dorey, entitled V is for Vendetta.

We shall ignore the theft of that copyright movie name to pursue more pertinent matters. The post was a rant against Mr. Ken McLeod who has devoted massive amounts of his time and effort to protect Australians from a sham organisation convinced it is above the law.

For twenty years Ms. Dorey has peddled misinformation designed to terrify an endless stream of new parents about vaccination. Over this time many of these same parents paid her via donation for the endlessly promised, but never delivered, cornucopia of “solutions”. The children grow, parents move on and for Meryl it was always simply rinse and repeat.

In 2009 Ken filed a complaint against the AVN with the NSW HCCC. The findings of their investigation were damning indeed. The complaints were not found to be “illegal”. The findings have not been quashed. It is what the HCCC did with the findings that was found to be technically outside of their jurisdiction. The AVN have not been “vindicated”. However Ms. Dorey did win an appeal against a Public Warning and an order to warn website visitors that the AVN is anti-vaccination.

An investigation into The AVN by the Health Care Complaints Commission of NSW found that the AVN website:

For some legal jargon and a look at what the OLGR position was regarding removal of the AVN’s Charitable Fundraising Authority, prior to it’s reinstatement check here.

Getting back to Dorey’s post we should note the following attacks on Mr. McLeod:

1- The Health Care Complaints Commission received a 90-page complaint by Ken McLeod – member of Stop the AVN and a man whose obsession with me seems to border on the psychotic. McLeod filed the original complaint, resulting in a 12-month ‘investigation’ by the HCCC and a public warning – both of which were later deemed to be illegal by the NSW Supreme Court. It appears that McLeod must spend hours every day trying to prove that I am a liar and that the AVN is responsible for global warming, the current financial crisis and the death of every child from infectious disease no matter where in the world it occurs (this is only slightly tongue in cheek).

Despite the HCCC’s rejection, it is obvious that McLeod will continue to try and get me charged with some sort of crime and will not stop trying to shut down the AVN until one of us is imprisoned or he is finally provided with the psychiatric support he seemingly needs.

2- The Department of Fair Trading which originally investigated the AVN back in 2009 due to another complaint from McLeod and others involved with the Australian Skeptics and Stop the AVN, has come back again due to yet another complaint, involving what appears to be dubious technicalities. […]

4- Earlier in the week, I received a call from a representative of the Therapeutic Goods Administration’s (TGA) Advertising Codes Council who informed me that they had received a complaint about us (gee, I wonder who would have made such a complaint? I just can’t imagine!) and I would be hearing from them in the next few days in regards to a matter I will have to respond to.

I won’t take up the entire page quoting Meryl Dorey. Follow the link above if you care to. Suffice it to say she blames Mr. McLeod and Government authorities for her own breaches of legislative requirements. That alone seems to require towering hubris.

Yet item 2 here has zero to do with Mr. McLeod, as does item 4 – referring to the TGA.

Regarding the Office of Fair Trading Ken did some digging and found the wonderfully generous complainant. Thanks to that person’s selflessness we can confirm that unless Mr. McLeod has moved to QLD he is innocent of the charges Your Honour. 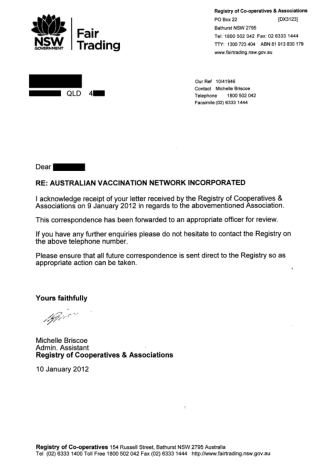 Clearly there are likely to be many people writing letters, filing complaints and quite simply expressing their keenness to see this sham gig brought to account. There’s no doubt no apology will be forthcoming from Ms. Dorey. A cursory glance at the customary vulgarity of her many transgressions should forewarn us of that.

I for one doubt that paranoid ramblings or a persecution complex will hide the truth for long.