It doesn’t take much digging and delving to discover that Meryl Wynn Dorey is committing fraud and always intended to commit fraud.

In what will be the first post to examine fraud capers perpetrated by Meryl Dorey we’ll have a look at the false promises and schemes used to mislead members about the always imminent “vaccine testing”. One may wonder, where is that money now?

Charity fraud is known to be the choice of cowards. The callous, the cruel, the weak. Fines are so puny as to render the prospect of prosecution remote. The maximum fine for an offence (regardless of it’s size) that can be imposed upon the guilty is $5,500. Little wonder then that in NSW the OLGR has prosecuted one person in seven years. Jesse Phillips informed us of this last July 24th, when writing Why Charity Fraud is The Softest Crime.

Gaming and Racing Minister George Souris has pledged that investigating charity fraud will be a priority and that he will initiate prosecutions where appropriate. […]

Last year the office cancelled the fundraising authorities for Solutions to Obesity Problems and the Australian Vaccination Network.

Solutions to Obesity Problems had its charity status revoked following publicity from radio presenter Ray Hadley while the AVN’s charity status was revoked after it was found to have breached charitable fundraising laws and potentially misled the public as its appeals were not done in good faith.

A person who participates in a fundraising appeal which the person knows, or could reasonably be expected to know, is being conducted unlawfully is guilty of an offence.

So let’s ease in to the “vaccine testing” swindle with a generic gimme ya money appeal, that sort of morphed into having a partially stated purpose of vaccine testing. Around June of 2006 Meryl was availing her members with a magazine called Doing The Rounds. In this first issue Meryl opines that the catchy themed “$26 donation from every member donation drive” has yielded a puny $1,700.

Unfortunately, the $26 from every member donation drive has been floundering. After a flurry of donations and pledges in the first days of our appeal, the not-so-grand total to date is just over $1,700. Considering the fact that we have over 2,000 AVN members and another 800 or so readers of this email who have never joined but are reading this information, I hope that this tally can be lifted substantially in the next week or so. If you haven’t donated yet, please do so and if you are not a member, have a think about joining. Also, remember to forward our information on to friends, family and acquaintances who you think might be interested in joining.

Nothing like a bit of flounder to get an Aussie interested. By issue two of Doing The Rounds the total was $6,016 – “a fantastic start” Meryl enthused. We also learn there’s a total goal of $52,000. The detective in you has spotted that 52,000 divided by 26 suggests 2,000 members. And Meryl has put the guilt trip on another “800 or so readers”.

Also great news! Meryl has announced “Our First Project With These Funds”. She has arranged with an independent laboratory to test two different vaccines for the presence of heavy metals. One will be a “supposedly mercury-free shot”. Also this money should now be going into a trust account with a stated purpose.

Issue 3 of Doing The Rounds brought more updates. Another 2 grand had hit the target, but there was $48,000 to go.

As you no doubt remember, we are looking for total donations of $52,000 which equated to a donation of only $26 from each one of you. Since the last newsletter, we have raised an additional $2025 in donations which is lovely but means that we still need more than $48,000 to get to our goal.

And there was a graph headed “How Close Are We Getting?” to prove it:

Next came Doing The Rounds Issue 4. Since July 1st $3,114 had rolled in. One generous donor had given $2,000. Two things also happened in Issue 4. The promise of putting the $2,000 toward testing vaccines for heavy metals “such as mercury” was made. This now locks the AVN into certain conditions laid out in The Charitable Fundraisng Act 1993 (NSW Legislation).

(1)  Any money or benefit received in the course of a fundraising appeal conducted by the holder of an authority is to be applied according to the objects or purposes represented by or on behalf of the persons conducting the appeal as the purposes or objects of the appeal.

(1)  Money received in the course of a fundraising appeal which is not immediately required to be applied to the purposes or objects of the appeal may be invested only in a manner for the time being authorised by law for the investment of trust funds.

Also, The AVN had applied to be a tax deductible gift recipient. Perhaps being over confident of success changes were made to their constitution. It all got confusing when they accordingly opened a new bank account called Australian Vaccination Network Inc. Gift Fund. Although the AVN’s application “to be a tax deductible gift recipient” was, to this day, never accepted (like say, with Charities), the practice of switching between these two accounts remains a feature of this and future scams.

Next up is Issue 5 of Doing The Rounds. There’s $8,541.59. $2,500 has been “set aside” for testing vaccines for the presence of mercury. I do hope you have no liquids in your mouth dear reader, because it was also announced that a new goal of submitting the “results of these tests for publication in a mainstream medical journal”, had been established.

So to date there should be one trust account holding $8,541.59 as the total so far of the “$52,000 donation drive”. And another trust account holding $2,500 for vaccine testing. The confusion with money going into Australian Vaccination Network Inc. and the meaningless Australian Vaccination Network Inc. Gift Fund bank accounts should also be corrected.

Things go a bit quiet on the Vaccine Testing front for 15 months, until January 2008. Members are then told about Your Donations At Work. Or rather, it seems their donations are not doing much work at all.

No more gushing detail about totals is forthcoming. Indeed members will never hear of any financial total related to vaccine testing again. They will also never hear of the fate of the $52,000 donation drive. Exactly how that $11,000 in total of theirs in the above screenshot is to be (or was) spent is a mystery. The fate of that money is never mentioned again.

Oh, never fear though. There were other feverish donation and fundraising drives in the meantime. Girls were being savaged with “mandatory HPV vaccination”. Only an “urgent $2,000” could save them. Legal action was to be launched by the AVN to save hospital employees from immunisation. I’ll cover those later. But in January 2008, Dorey had cranked up ye olde “vaccine testing” myth again.

You see, the donations aren’t at work because the AVN now needs a “couple of people with expertise in [vaccine testing]”. Perhaps a Laboratory Scientist, a Research Scientist, a Graduate Scientist or a medical or healthcare professional previously involved in research. They still “plan on submitting it for publication in a medical journal”.

Then came February 2008. Can You Help With Raising Funds For This Project? Suddenly donations weren’t at work anymore. In fact, they apparently weren’t even enough anymore.

I don’t have a problem with total donations not being enough to test vaccines for heavy metals. In truth the entire hoped for $52,000 would have delivered little in that respect. It’s the way this phoney caper is presented that’s concerning. And we see more polish to AVN’s standard conspiracy laden scheme of them saving members from the danger of vaccines.

The call for money blurb was:

In 1999, the Australian government ordered the removal of mercury from all childhood vaccines. It was several years however before the old mercury-laden vaccines were actually used up and in all that time, children continued to receive mercury – a known killer of brain cells – in their shots.

Recent vaccine tests conducted by HAPI (Health Advocacy in the Public Interest) indicate that many if not most childhood and adult shots may still contain this toxic heavy metal. Independent testing is needed!

The Australian Vaccination Network is planning on testing every currently-licensed vaccine for the presence of toxic heavy metals. Funding is required to perform these tests properly. Without proper independent tests, Australian children and adults may continue to be poisoned by the failure of the government to ensure the removal of toxic ingredients from vaccines.

This continued on for four more months. You can check in Doing The Rounds March, April and June 2008. Of course it’s entirely bogus. Whatever amount was needed was never conveyed. Clearly they were not consulting, or knew it was financially prohibitive. Whatever total was raised was also never conveyed. It was a crude grab for dollars. Nothing less.

Nobody ever heard of this “scheme”, any respondents to the request for research help, the proposed medical paper or a single cent related to it again. Nonetheless every AVN publication during and since 2006 have provided options for donating, getting slicker and more bold over time.

To the delight of AVN watchers however, Meryl Dorey did make one other attempt to keep the “vaccine testing” scam afloat. Heavily weighed down with donor dollars Dorey was off to the USA in October 2010. Donors had paid for multiple iMacs, iPads and countless flights around Australia. Why not a trip to good old USA? Why not indeed?

Exciting Times Ahead! gushed the October 2010 edition of Living Wisdom/AVN newsletter. Meryl was off to the Freedom For Family Wellness Summit in Washington. Just in case you were wondering what Meryl was doing jetting off to the USA almost 5 years after first promising to spend your money on Vaccine Testing you got this *: 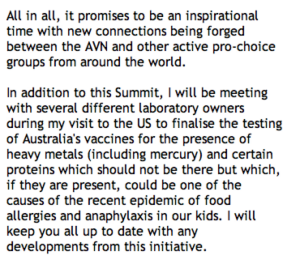 Of course no feedback followed and no-one was kept up to date with what is essentially the last entry (to date) in the sorry saga of Meryl Dorey’s promised vaccine testing.

Just this one example indicates that the up to 25 breaches of The Charitable Fundraising Act uncovered by the OLGR were not “minor”. Indeed the most basic requirements have not been adhered to. No member has a clue where any money is, exactly what it has been spent on, or in this and other cases at what stage, and indeed how likely, the fruition of certain projects are.

All that is constant is the ongoing siphoning of money from a rapid turnover member base. Rather than accusing her critics of libel Ms. Dorey would do well to address the damning evidence that comes from her own hand. That is published under her own name.

In closing one can only be drawn again to consider the many claims of threats and harassment Dorey claims comes her way from Stop The AVN or members of various Skeptic groups. It’s a tired old line and few believe it. Her critics work from evidence not emotion.

However, if it were true I’d be worrying about the thousands of members schemed and lied to for financial gain.

* I’m indebted to an alert AVN watcher for knowing where to recover this text.