Every week up to a thousand Australians are dying in the public hospital system alone from adverse reactions to properly prescribed medication and hospital borne infections and medical error. This is the elephant in the room. If the government and medical community are really concerned about the health of Australians, why aren’t they doing something about this obvious, um, huge cause of death in Australia instead of worrying about measles?

The arguably spectacular misinformation Meryl Dorey pushes as an antivaccinationist, comes often as what can most kindly be called an utterly ridiculous mantra designed to promote fear of scientific based medicine.

This was in response to eight infant fatalities associated temporally with Hepatitis B vaccination in China. Regrettably China’s growing success with mass hepatitis B vaccination has now met a challenge. Fortunately in China the medical community is working effectively with the evidence and training they have. Despite the unambiguous harm HBV has caused China and the success of HBV vaccine programmes worldwide, Dorey commented on Facebook as seen above.

I won’t overly review Dorey’s claims on medical error and hospital borne infection. Although (updated in December 2011) a 2009 report from the Australian Group on Antimicrobial Resistance cited Commun Dis Intell 2011;35(3):237–243, and notes in the Abstract (bold mine):

Given hospital outbreaks of CA-MRSA are thought to be extremely rare it is most likely that patients colonised at admission with CA-MRSA have become infected with the colonising strain during their hospital stay.

We can place the general figure on medication in context by looking at adverse reactions. The TGA reporting system kicked off in the late 1960’s becomming computerised in 1972. As 2011 came to a close there were 247,000 suspected adverse events in the TGA database. It’s also worth adding that a primary aspect of “medical error” is indeed that of Adverse Drug Reaction, making Dorey’s claim somewhat meaningless. 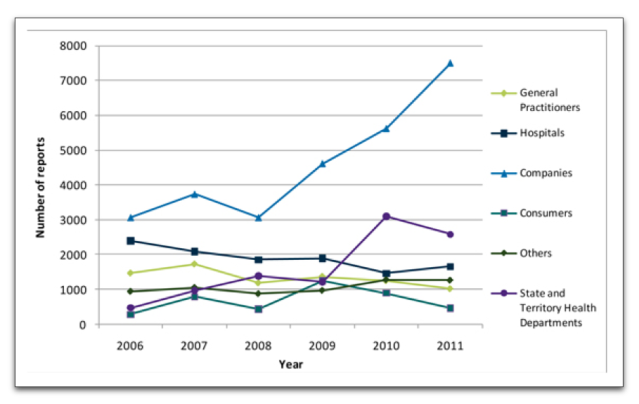 In 2011 the TGA received approximately 14,400 reports with 52% from pharmaceutical companies, 12% from hospitals, 7% from General Practitioners (GPs), 18% from State and Territory Health Departments and 3% from consumers. The sources for other reports (8%) include community pharmacists and specialists.

Placing the scale of insult inherent in Ms. Dorey’s deceit even more in context we should note that the TGA received an average of 1,200 reports each month. This includes all events – not just those involving mortality. More so the TGA receive data from six sources with the category of “hospital” enveloping public and private. The Department of Health and Ageing regards hospital outbreaks of community-associated MRSA as “extremely rare”.

Thus, Meryl Dorey’s 1,000 fatalities per week in Australian public hospitals appears to be beyond tenuous.

However there are a number of problems facing those taken in by the growing trend of “natural” or “alternative” choices to medicine. Not only is there growing evidence of harm, the absence of any efficacy at all is frequently documented.

Seventeen year old Christopher Herrera is one of a growing number who face organ damage, organ failure or death thanks to herbal supplements each year. In his case a “fat burning” dietary supplement resulted in liver damage. Initially placed on a transplant list, Chris was able to keep his liver but his lifestyle is now markedly compromised.

The New York Times report that such supplements account for 20% of drug related liver damage. This is a three-fold increase from a decade ago and comes from a review of the most severe cases in the USA. Evaluators believe the actual figure is higher. As is the case in Australia a lack of strict regulation standards for these products result in over-inflated claims, not backed by evidence, and the potential for adulteration of the product itself.

This December 17th, The Annals of Internal Medicine published three conclusive articles on both the harm and inefficacy linked to alternatives to medicine. An editorial Enough Is Enough: Stop Wasting Money On Vitamin and Mineral Supplements, summarised the research.

After reviewing 3 trials of multivitamin supplements and 24 trials of single or paired vitamins that randomly assigned more than 400 000 participants, the authors concluded that there was no clear evidence of a beneficial effect of supplements on all-cause mortality, cardiovascular disease, or cancer.

In another instance the efficacy of daily multivitamin usage to prevent cognitive decline in just under 6,000 men aged 65 or older was evaluated.

After 12 years of follow-up, there were no differences between the multivitamin and placebo groups in overall cognitive performance or verbal memory. […] … compatible with a recent review of 12 fair- to good-quality trials that evaluated dietary supplements, including multivitamins, B vitamins, vitamins E and C, and omega-3 fatty acids, in persons with mild cognitive impairment or mild to moderate dementia. None of the supplements improved cognitive function.

Another study looked at supplement with high-dose, 28-component multivitamins involving 1708 males and females who had previously suffered a myocardial infarction.

After a median follow-up of 4.6 years, there was no significant difference in recurrent cardiovascular events with multivitamins compared with placebo (hazard ratio, 0.89 [95% CI, 0.75 to 1.07]). The trial was limited by high rates of nonadherence and dropouts.

The authors note that research into vitamins and minerals in the prevention of chronic disease “have consistently found null results or possible harms”. Data from tens of thousands of people in randomly assigned trials show “β-carotene, vitamin E, and possibly high doses of vitamin A supplements increase mortality”.

Later they stress most supplements do nothing when it comes to preventing chronic disease or death and with no justification for use, should be avoided.

An audio summary of these editorial points can be accessed here.

An audio summary of the editorial is below, or an MP3 may be downloaded here. (Firefox Users. If you’re using the Bluhell Firewall add-on click “allow” as the file is quite safe).

Thus whilst the anti-vaccine and anti-medical science lobby continually manage to distort discussions on the value of conventional medicine, the evidence is time and again not in their favour. We are either hearing of the dangers of modern medicine itself or the wonders of natural concoctions.

Both trends are dangerous and fallacious.